One dead in late evening accident in Corozal

Wednesday, October 28, 2015. Aaron Humes Reporting: The Statistical Institute of Belize reports good news in the area of trade and inflation for September 2015. Imports slipped slightly for the month of September to $162 million, as no premium fuel was imported in this month and prices for other fuels were lower.  Fewer clothing and cigarette purchases led to a $5 million decrease in imports to the Commercial Free Zones. 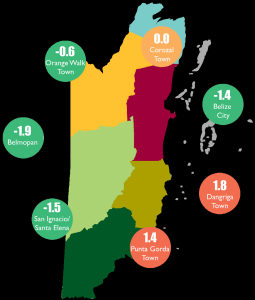 Marked increases in the categories of ‘Machinery and Transport Equipment’, ‘Other Manufactures’ and ‘Chemical Products’ offset these declines. Notably, increased purchases of farm equipment, laboratory equipment and fertilizers were responsible for the growth within these categories.

The trade imbalance has widened, with $1.5 billion in goods imported to just $439 million exported over the first nine months of 2015.

Sugar, citrus and banana fueled the rise in domestic exports to $36 million for September, though the sugar sales are due to the late start for that season. $8 million in bulk sugar was shipped in August and September.  Among the major exports, sales of marine products saw the only decline for the

The decline in exports is due to diminished sales for three of Belize’s major exports, crude petroleum, marine products and citrus concentrate, led to the downturn over the nine month period. However, banana and sugar grew steadily from January to September, with banana sales rising from $72 million in 2014 to $77 million in 2015 and sugar from $109 million to $113 million.

Inflation continues to be negative, with  consumer prices 0.7 percent lower in September 2015 than in the month of September 2014.  For the first nine months of this year, an inflation rate of negative 0.9 percent was recorded.
Lower fuel prices led the decline while food and non-alcoholic beverages declined by a minuscule 0.2 percent.

The Institute says that Significant increases continued to be observed in the prices of beef, pork and
eggs. These were offset by lower prices in red kidney beans, cooking oil, shortening and some fresh vegetables.
“Housing, Water, Electricity, Gas and Other Fuels” saw no change overall in comparison to September 2014. Although home rental prices increased by 0.8 percent on average, they were offset by a continued decline in the price of Liquefied Petroleum Gas (LPG). The average price of a 100 pound cylinder of this product fell steeply, from $115 in September 2014 to $98 in September 2015.
While most municipalities recorded a decrease in consumer prices during the month of September 2015, Dangriga and Punta Gorda had inflation rates of 1.8 and 1.4 percent, respectively. Home rental prices were the highest in these areas, increasing by 2.7 percent in both municipalities and overshadowing the effects of lower fuel prices to result in an overall increase in consumer prices. On the other hand, Belmopan recorded the lowest inflation rate of negative 1.9 percent, while Corozal Town saw no change in prices, on average.