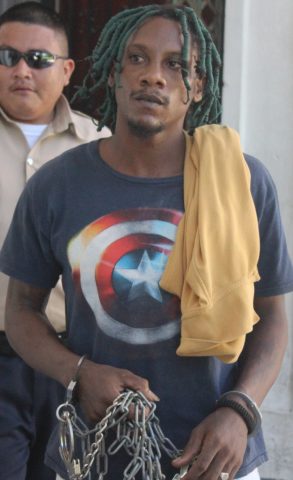 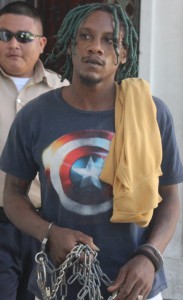 Card was convicted of wounding his ex-common-law wife, whose name we will leave out for privacy reasons, by knocking her out on Freetown Road in June in front of their traumatized five year old daughter who was being taken to school.

Chief Magistrate, Anne Marie Smith decided not to impose the maximum penalty but derided what she called Card’s fairy tale version of events.

The complainant testified as well as the friend who witnessed the incident and came to her aid.

According to the complainant, on the morning of June 9, 2015, she was walking with her 5 year old daughter taking her to school, when she met her ex and she allowed him to walk with his daughter for a while despite the fact there is a restraining order for him to stay away from her.

But when she decided to end his meeting with the child, he got upset and slapped her across her face so hard, it made her fall to the ground. He then continued to beat her up until she went unconscious.

Keisha Westby, a friend who worked over at Mel’s Kitchen on Freetown Road saw the incident and came to her friend’s aid.

Police caught up with Card on Saint Joseph Street and he was later positively identified him as the culprit. But in court, he claimed that another man who was his ex’s new partner, rode up on a bike and hit him in the mouth. Card said he punched back but the man ducked and his ex-got hit by accident. He claimed the woman seemed to be OK and was getting up so he tried to chase after his attacker, and denied intentionally hitting his former partner. .

Card’s sentence is to run concurrently with 3 years in jail time ordered at the Belize Family court for breach of a protection order against his ex.  He was also fined $3,000 to pay immediately in default 1 ½ year more behind bars.

Card has two other violence offense charges pending against his ex for trial at the lower court for an aggravated assault with a machete and harm.