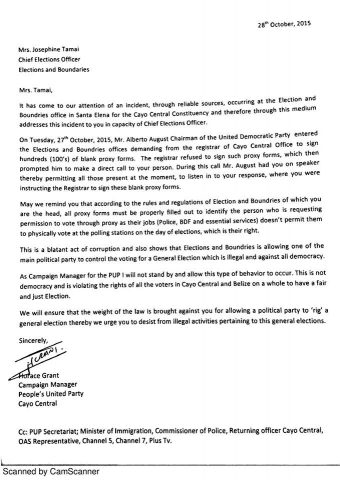 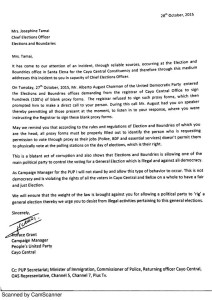 According to Grant, the PUP has been reliably informed of an incident which occurred at the Election and Boundaries office in Santa Elena for the Cayo Central constituency in which August entered the offices demanding the Cayo Central registrar to sign hundreds of blank proxy forms.

The registrar, according to the reports, refused to sign the proxy forms which then prompted August to call Tamai directly. August, allegedly had Tamai on speaker phone for everyone to hear and Tamai proceeded to instruct the registrar to sign the blank proxy forms.

Grant, by way of the letter, accused Tamai and August of a blatant act of corruption saying that the Elections and Boundaries Department is allowing one of the main political parties to control the voting of the general election. Grant added the act was illegal and “against all democracy.”

According to Grant, the PUP will ensure that the weight of the law is brought against Tamai for allowing the UDP to ‘rig’ the elections.

Grant also reminded Tamai that it is the right of Belizean citizens who cannot physically appear to vote to do so by proxy but each proxy document must be properly filled out to identify the person requesting proxy-vote.

BMG has made several attempts to get in touch with Tamai but has been unsuccessful up to this point.