Man and minor from Succotz busted for weed 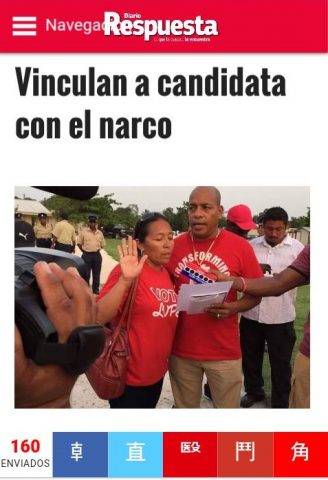 Monday, November 2, 2015.  BMG: The Mexican press has linked United Democratic Party (UDP) candidate for Orange Walk South Guadalupe Magaña and her husband with organized crime. They further allege that he is financing her campaign with proceeds from organized crime. 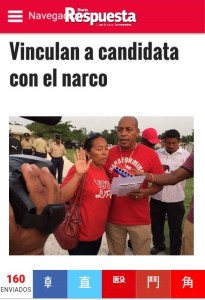 The Diario Respuesta is alleging that Magaña’s husband, Nyco Dyck is working with Emerlindo “Melin” Vasquez in the production of methamphetamine in a clandestine laboratory in the jungle in the San Carlos/Indian Church Village area. “Melin” Vasquez is currently in prison since his arrest by Mexican authorities in February 2013 for possession of 45 kilos of crystal meth along with six others. Vasquez still runs his illegal business from his cell, claims the Diario Respuesta.

The article makes mention of a record dated September 8th from the Belize Police Department that shows the investigation into this operation has been ongoing for a long time. It goes on to make bold allegations of how the entire operation is carried out by Nyco Dyck.

Dyck is reported to run a highly guarded operation in a lab in the jungle in the San Carlos/Indian Church Village area, receiving supplies from an alcohol distillery in the area, which is not named. Three miles from that lab is an airstrip from where the drugs are reported to be shipped out to the United States.

The money from that operation is being used to finance Magaña’s campaign says the report, and should she win, that she will facilitate the continuation of organized crime.

We checked with authorities in Orange Walk about the alleged investigation of Magaña but were told that there is no such operation.

Here’s the link to the article published by The Diario Respuesta: http://www.diariorespuesta.com.mx/policiaco/vinculan-a-candidata-con-el-narco/