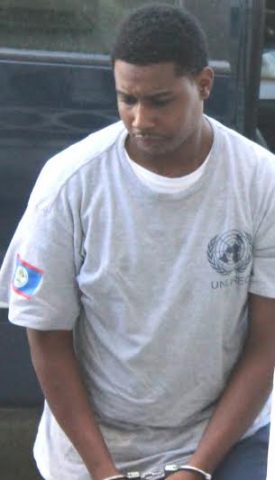 Tuesday, November 3rd, 2015. Aaron Humes Reporting: Breaking up is hard to do. But when one fed-up woman broke the news to her soon-to-be-ex last week, the resulting fight cost her a cell phone, possibly an eye, and sent him to jail. 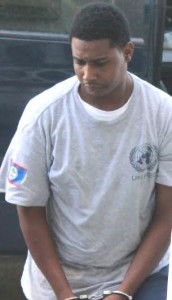 Kamisha Yorke told police that at around 6:30p.m. Monday, October 26, 2015, she was at her home when her boyfriend, Kyle Perez arrived at her home in Sandhill, trying to convince her not to break up with him. But she insisted that she was tired of his abuse and that she wanted out of the relationship and that is when Perez got upset.

She retrieved her black Samsung touch screen cell phone and was calling 911 when he took it away and hit her to the left side of her face. She fell to the ground and the phone fell with her, breaking the screen of the phone in her face.

According to Yorke, that’s when Perez grabbed her by the hand and dragged her into the bathroom. She yelled out to him that she was in pain and that’s when he noticed what injury she had suffered in her face.

Perez, a resident of Salt Creek area, Sand hill Village is remanded after he was denied bail for charges of maim and damage to property by Magistrate Ladonna John.

The court prosecutor did not object to bail but expressed concern that they shared the same home; the Magistrate decided not to grant bail because of the extent of her injuries and because, as she told a tearful Perez, in her view it was not safe for him to be around her.

Perez insisted that it was a misunderstanding, that he was in danger of losing his job, and even claimed that he had seen Yorke since the incident and that nothing was wrong with her eyes.

Perez is due back in the Belize City Magistrate’s Court on January 4, 2016.