Four years imprisoment for youth caught with firearm at funeral

Ex-Lands Minister: Department “getting to be too much” 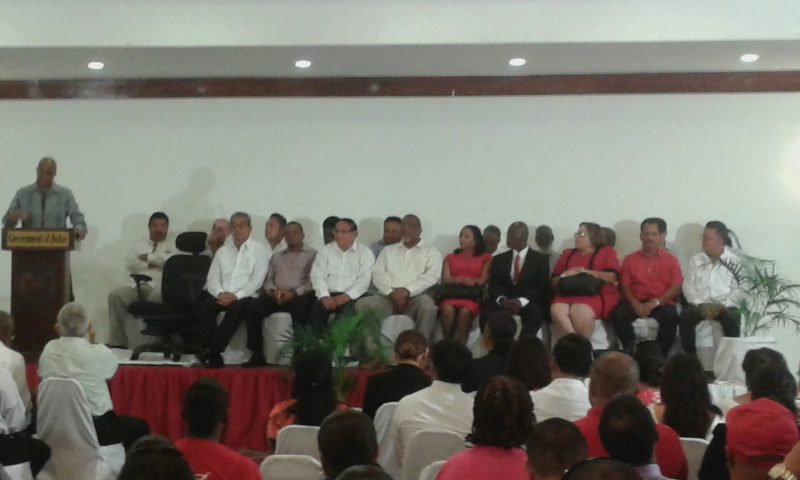 Monday, November 9, 2015.  Aaron Humes Reporting: Eighteen men and three women will serve in the new Cabinet of Prime Minister Dean Barrow; they were sworn in this afternoon in Belmopan and will meet tomorrow morning at ten in Belmopan. Among them are two surprise victors in the Belize District and the first woman Attorney General of Belize, along with the many veterans of two previous Cabinets and a Senator who has become a Government troubleshooter in his time in the administration. 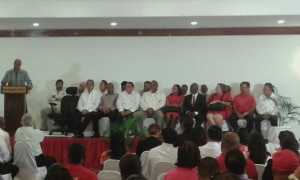 The Prime Minister continues as Minister of Finance but adds the Public Service, including Elections and Boundaries, and Energy and Public Utilities to his portfolio. The man with direct responsibility for those latter two Ministries is Minister of State Frank “Pawpa” Mena of Dangriga. Barrow has dropped Economic Development to Cayo West representative Erwin Contreras, who also adds a Petroleum portfolio and keeps Investment, Trade and Commerce. He also gains a Minister of State for the latter three portfolios, Tracey Taegar-Panton.

The other major change is at the Ministry of Natural Resources, where longstanding Minister Gaspar Vega ceded control to Senator Godwin Hulse, who returns minus all of his previous portfolios except for Immigration, where Minister of State Beverly Castillo, a former CEO in Natural Resources, was chosen to head Immigration instead. Vega keeps Agriculture and adds Forestry and Fisheries, Environment and Sustainable Development, all from ex-Minister and Senator Lisel Alamilla. Dr. Omar Figueroa assumes control of the latter two Ministries.

The sole junior Minister to be promoted to full Minister is Hugo Patt of Corozal North, who was appointed Minister of Labour, Local Government and Rural Development. Hon. Edmond Castro, beset by multiple scandals in his seven years in Government but a rock in Belize Rural North for the party, adds national emergency management to his Transport portfolio but remains junior to Minister of Works Rene Montero. 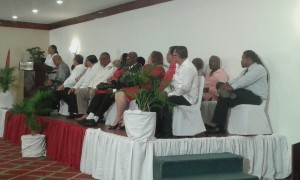 Among the returning Ministers, Patrick Faber takes Culture from Manuel Heredia Jr.; his new Minister of State is Elodio Aragon, Jr. who holds responsibility for the latter three Ministries. All other Ministries remain the same including the Ministry of Foreign Affairs, once again headed by Wilfred Elrington, except that Minister of Health Pablo Marin is joined by Corozal Southwest representative Dr. Angel Campos as Minister of State, who assumes charge of National Health Insurance and Primary Health Care.

The United Democratic Party (UDP) is entitled as ruling party to six members of the Senate and Prime Minister Dean Barrow named those persons today as well. Leading the pack is Godwin Hulse as Leader of Government Business, continuing a run that started when he was senator for the business community in about 2008. The other new Senators are Steve Duncan, attorneys Aldo Salazar and Francine Burns, and principal of Corazon Creek Technical High School in Toledo, Macario Coy. Out are ex-Ministers Lisel Alamilla, Joy Grant and Charles Gibson, as well as Gerardo Sosa and Juliet Thimbriel.

Lee Mark Chang is the pick for Senate President and Michael Peyrefitte will be invited to continue as Speaker of the House. Carlos Perdomo was named Cabinet Secretary once more and Joseph Waight continues as Financial Secretary.

P.M. Barrow explained that he could not resist giving a Senate seat to Dr. Carla Barnett, defeated party candidate in Freetown, because of how much she brought to the table as a long-standing economic wizard who worked at the Caribbean Development Bank and elsewhere. It was a long-standing personal rule of his that no defeated party candidate could be given a Senate seat.

Most of the veteran Chief Executive Officers (CEO’s) are still in place but there are a few lateral moves and new names. Dr. Peter Allen leaves Health for Public Service, Energy and Public Utilities under Frank Mena, with former Director of Medical Services for the Ministry Dr. Ramon Figueroa taking over.

The Government Service bids farewell to ex-CEO of Trade and Investment Michael Singh, and ex-CEO for Public Service and Election and Boundaries Marian McNab. The Prime Minister gave them his personal congratulations and an invitation to continue assisting the Government in other capacities.

Should the newer elected representatives have been given better choice of Ministries than the old gang? The Prime Minister doesn’t think so; his primary thought was establishing the “best fit” and maximizing the talents of his chosen few.
The Prime Minister has stated that the seven Ministers of State will have the same responsibilities as the Ministers they are junior to in their appointed portfolios, and says this has worked well in his previous administration. But what is their legal authority?
On the matter of Statutory Instruments, Barrow explained that while it may be legal for only Ministers to sign, they should not rock the boat and he doesn’t expect them to do so. Cabinet reviews all Statutory Instruments prior to signing and issuance.
As for the re-appointment of Senator Hulse, described as “the lockdown Minister” for trying to remove political hustling from the Ministries which he has headed, P.M. Barrow describes him as someone who likes to put in workable systems and he expects the same here.