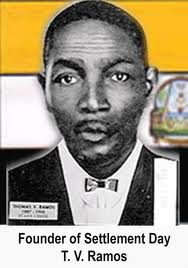 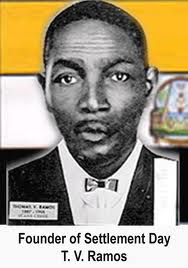 the outstanding work of Stephen Okeke but he has yet to be paid for it, even considering that he started work before getting a full commission or sponsor.

Officialy it was later acquired by the Dangriga Town Council but Okeke has been having a difficult time collecting the 30 thousand dollars for it; in fact, it has been over a year of ongoing efforts.

Last week Abdul Nunez, proud Garifuna and social activist came forward to assist in the cause. He calls himself a representative of the Garifuna people and on Saturday, he hosted a 3-hour radiothon on LOVE FM during which 6 thousand dollars were pledged.

With only 3 more days left to November 19th and 24 thousand dollars to go, there is much work to be done so the appeal continues. There is an Atlantic Bank account open to make contributions.

Thomas Vincent Ramos is credited as the founder of Garifuna Settlement Day, which was first observed as a national holiday in 1977. Before, it was only celebrated in the Southern Districts of Toledo and Stann Creek starting in 1943.