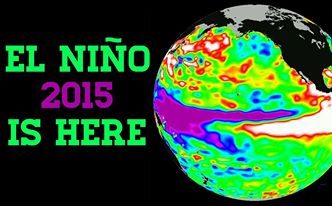 Tuesday, November 17th, 2015. Aaron Humes Reporting: The United Nations’ weather agency has predicted that this year’s El Nino climate pattern will be one of the three strongest such patterns in 70 years as it is expected to strengthen

further through the end of the year.

While the current El Nino is likely to be among the worst ever, the UN says the world is better prepared for the fallout than in the past.

Severe droughts and flooding are already underway in the tropics and subtropical regions of the world, and they bear all the marks of the pattern, said the head of the U.N. World Meteorological Organization at a news conference on Monday.

Another report from the U.N. said “unusually heavy and widespread” rains in northwest Africa, and the area around the Horn of Africa and Yemen could trigger surges in locust populations. The wet conditions are ideal for the insects’ breeding.

The pattern is also worsening an ongoing drought in Indonesia that is hindering authorities’ efforts to fight the roughly 1,200 wildfires burning across the country.

While the pattern’s link to global climate change is unclear, El Nino is “turning up the heat even further” on already record surface temperatures, World Meteorological Organization Secretary-General Michel Jarraud said in a news conference in Geneva.

“It’s not entirely clear how El Nino interacts with the changing climate,” said Jarraud. “Even before the onset of El Nino, global average surface temperatures had reached new records.”

Leaders from around the world are scheduled to meet in Paris beginning on Nov. 30 to discuss commitments to reducing greenhouse gas emissions.

U.N. Children’s Fund (UNICEF) has said that 11 million children could suffer from hunger, disease and a lack of water in eastern and southern Africa due to the weather disruptions related to El Nino.

The U.N. World Food Program also estimated that 2.3 million people in Central America will need food aid, as a result of El Nino’s effects on agriculture there.