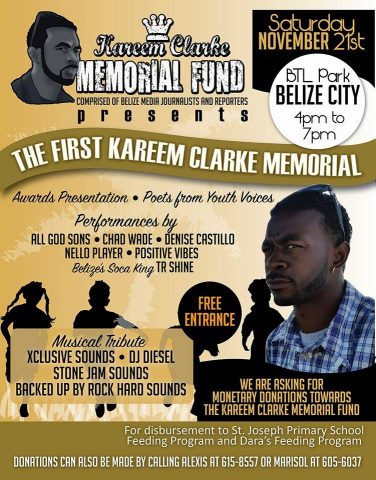 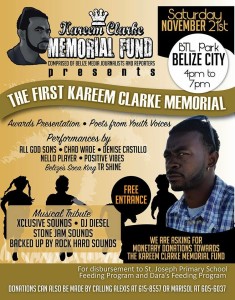 The winners received their prizes a short while ago at the first annual Kareem Clarke Memorial going on this evening at the BTL Park and carried live here on KREM Radio.

Competitors were asked to write about this topic: What is the nature of politics in Belize? How can I change it?

Earlier there were performances from Kareem’s brother Kerwick Samuels and a dance by niece Georgia Henry and her friends in Kareem’s honor. The Image Factory, represented by Katie Usher, handed over a donation of books and funds raised for the Memorial Fund.

The Kareem Clarke Memorial Fund was established in July 2015 by the local community of journalists and news personalities following the early morning murder of Kremandala journalist Kareem Clarke.

The purpose of the Fund is solely charitable and specifically, was set up to promote literacy and contribute funding and dry goods to two school feeding programs in Belize City as well as to support the schooling of Kareem’s nieces and nephew.

In August the group did a food drive in Clarke’s memory. The event is free but it is a fund raiser and those who are attending are reminded that the fund is accepting donations in Kareem’s honor for its programs.