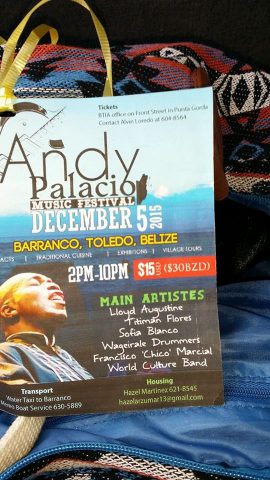 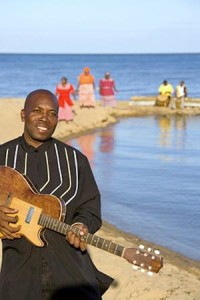 By Chrisbert Garcia: For months, volunteers, musicians, artists, family and friends have been spreading the word about the first annual Andy Palacio Music Festival to be held in Barranco Village – the home and final resting place of the legendary musician – and, on Saturday, their work paid off.

By 9:00 a.m., caravans of cars and trucks were streaming down Main and Front streets of Punta Gorda Town, headed to the village. Two buses arrived with visitors from around the country who came to see multiple Belizean artists perform on stage in honor of Andy Palacio.

People chattered on the streets, deciding who could ride with whom and when. The bumpy road to the village was one they would joyously take to be there to hear the music, eat the food, and meet with family and friends.

Oscar Burke, a local PG musician worked all morning with others to load up his musical equipment, the stage and his band – The Rosewood Studio World Culture Band – to get there in time.

Burke helped to organize for weeks and had worked tirelessly, selling tickets to the event for days. “I had to give my portion,” he said, following his band’s performance. “It’s could be a good example [for people to learn from.]”

As people meandered into the village, passing by Andy’s former home, they lingered and laughed, hugged and greeted as the bands worked to put together the stage and equipment. Large tents stood in front of the stage, against the backdrop of an ocean view, with a number of chairs for guests to sit and watch. The grass –looking out to the ocean and the distant Guatemalan mountains – was dotted with people sitting with conch soup in hand, or munching on sweetbread, or simply snapping pictures. Villagers stood at their respective tents and tables, selling various local foods to honor their Garifuna culture. 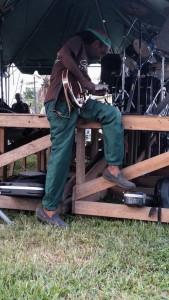 The pride of this Garifuna village was palpable. Everywhere, people spoke robustly and happily in their native tongue. That is what this would be about, according to many who helped coordinate the event.

Roy Cayetano, chairman of the Andy Palacio Foundation, spoke to the crowd in both Garifuna and English. He spoke of the late musician and at one point choked up as he thought of the local icon’s last days.

“During his last performance here, he stood and held up his guitar and said, ‘I am home! I am home!’” Cayetano had to pause for a moment as he spoke. His voice cracking slightly as he continued, “We did not know he was, indeed, coming home.”

With that, he took a deep breath and invited everyone to participate in the festivities that would honor his late friend and colleague.
Cayetano said aside from being a legend in his own right, the late Palacio was dedicated to teaching, preserving and, of course, his music.

He said Palacio left a promising career as a teacher to pursue his musical career. Interestingly, it was a combination of teaching and music that was one of Andy Palacio’s favorite genres: Paranda music.

“He was a cultural ambassador for our country. He was very versatile…one of the most brilliant people I [knew].”

Cayetano shared the concerns of Palacio and admired the work he did. The Andy Palacio Foundation serves to honor Palacio’s life and Cayetano felt the foundation’s involvement with the first annual celebration would lend legitimacy to the event.

“Andy felt strongly about preservation. He saw there was serious cultural erosion happening,” Cayetano shared. “Traditional language and cultures are engaged in an unfair battle with the west,” he said, clarifying education is filled with a lot of western culture, leaving a lot of the Garifuna culture, language and traditions absent from the learning of younger generations.

According to Cayetano and many others, this was an issue Palacio was committed to resolving. 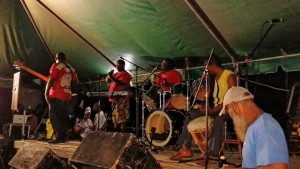 Dr. Ana “Mountain Spirit” Arzu of the Wagiya Foundation – dressed in traditional Garifuna gown of purple and white – said this was the best way to honor Andy Palacio and his dream.

“He lamented to me a lot. I was his [sounding board],” she recalled. “He wanted to teach the kids and he wanted to build a music conservatory,” Dr. Arzu said. “[The festival] a way of keeping things right.” The Bush Doctor said there were some who wanted to build a museum in his honor but, “[Andy Palacio] was not one of those people you just lay in the ground and forget,” she said. “This puts him in the light.”

The festival would raise funds to build the conservatory Palacio long dreamt of. The community activist said the area is struggling and Andy Palacio saw it. “He was worried about the kids and he knew he could make it better. He saw the deterioration of [Barranco] and he saw the big picture. He was an activist, a revolutionary.”

Arzu said raising the funds to build the Andy Palacio Music Conservatory of Barranco is the best way to honor the local legend. “The music conservatory is a way to carry on his dream.”

Local musician Edley “Lyrical king” Martinez knew and performed with Palacio. “He was like a show all by himself,” Martinez recalled. “He became a musical icon. He represented a people – our people – and he knew the ‘divide and conquer’ was all wrong.” Garifuna language was dying, Martinez said, and Palacio ached over it and, thus, became determined to change things so the culture and language would not be lost.

“He was a very educated guy. He mastered all the Garifuna genres: Hungu Hungu; Arumahani; Chumba; Paranda.” Martinez spoke the word “Paranda” with deliberate enunciation. “It’s kind of like Garifuna Reggae,” he explained. “It’s festive. But,” he continued, “Apart from being easy to dance to, it educates.”

The lyrics teach things that are important in the Garifuna culture, he explained. “Don’t leave your mama suffering behind,” he said. “She took care of you. Now you take care of her.”

Martinez would be performing at the festival and knew Andy as a friend and fellow-musician. “He was a good friend and he made a great contribution to preserving the Garifuna culture.”

Doug Claiborne attended because he, like others who went, loves music and wanted to see the performances of the bands who were in attendance: Lloyd Augustine; Ttiman Flores; Sofia Blanco; Wageirale Drummers; Fancisco ‘Chico Marcial; World Culture Band, and others. 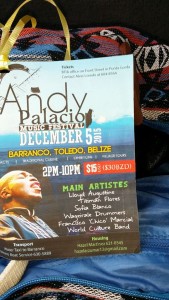 Originally from San Francisco, California, Claiborne plays bass guitar outside of his work. Claiborne said he felt it was good to honor Andy Palacio’s life and music.

“I’m here to learn,” he said, noting the importance of music in life. “A good song is something people can listen to and inject themselves into,” he said. Claiborne later donated a violin to the anticipated music conservatory in honor of Palacio.

The festivities began with the local students performing the National Anthem, clad in their traditional Garifuna colors. Their small voices, rang loud into the crowd and the applause came from pride in seeing the young ones sing such a song in their native language.

Then musicians came and performed after telling their own stories about how Andy Palacio had effected their lives and their music. Every one of them, had a story.

People danced in celebration and pride to the rhythm of the music as if their feet were tied by invisible strings to the sounds, as if it could not be helped. It was not long into the festival that the front of the stage was flanked by fans dancing and singing along.

This would be the first of what the organizers and supporters hope to be an annual event.

“Let us build a festival so that next year, all roads will lead to Barranco,” Cayetano said. His voice rose as he made his proclamation to the crowd, and everyone cheered in excitement.

Andy Palacio was a teacher, cultural ambassador, musician, and artist who changed careers to become a full-time musician. He was passionate about preserving the culture and language of the Garifuna people and all proceeds to the event will go to building Palacio’s dream school for music in his native village of Barranco. He died unexpectedly in Barranco in 2005, at the age of 47.