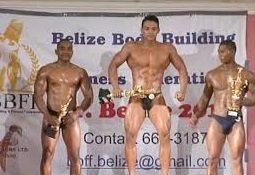 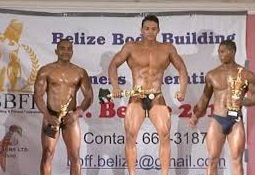 By Aaron Humes: Later this week a trio of popular Belizean body-builders are travelling to El Salvador for a world championship in their respective classes. We caught up with the group in training on Monday and spoke with president of the Belize Body-building and Fitness Federation (BBBFF), Mirna Paul-Greenidge.

Belize will be represented at the World Junior and Masters Body-building and Physique Championships by defending junior national champion Oyinkro Akpobodor; Masters champion Clayton Greenidge (husband of Mirna Paul-Greenidge), and Ariel Leslie in the Physique category.

Missing out is four-time Mr. Belize Rigo Vellos, but it is not his fault: he does not have the age to participate in the competition in any of the selected categories.

Akpobodor, also known as “Powa” or “The African,” is already a regional and national medallist and told us he is looking forward to becoming a world champion. Meanwhile, Clayton Greenidge, a multiple-time champion, is making his world championship debut as well. He says he has never looked nor felt better.

The event takes place from December 11-14.