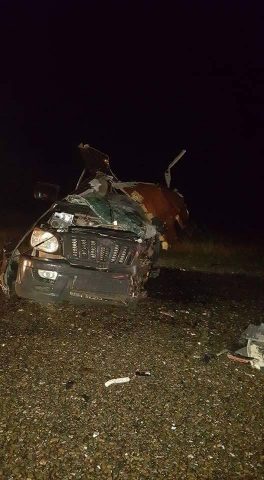 By Dalila Ical: One man is dead while a Mexican bus driver faces possible prosecution following a traffic accident on Wednesday night. 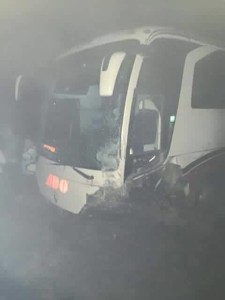 Sometime after 8:00 last night a grey Mahindra pickup truck driven by Artemio Mendez, a BDF Staff Sergeant and an ADO bus from the Linea Dorada bus line in Mexico, driven by 31-year-old Matias Gaspar Marcus on its way to Cancun collided between miles 40 and 41 on the Phillip Goldson Highway.

Authorities report that as the bus headed towards the Northern border, the pickup which was headed in the opposite direction came on its lane crashing into the side of the bus. The impact sent the bus about 10 feet off the right hand side of the road and the Mahindra, belonging to the BDF, remained in the middle of the highway extensively damaged. Police say the collision tore off the Mahindra’s bonnet and driver’s door; the bus was damaged to the right side.

There were 34 passengers in the ADO bus who were not injured. Mendez, however, remained trapped in the driver’s 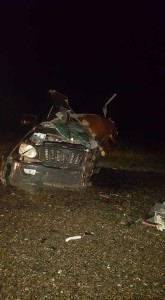 seat of the Mahindra while his passenger, 31-year-old Rrjel  Flores, a BDF lieutenant, was taken to the Northern Regional Hospital for treatment. A doctor later pronounced Mendez dead on the scene.

After the impact, police say the driver of the ADO Bus, Matias Gaspar Marcus a Mexican of Bacalar Quintana Roo fled the scene but later handed himself in to Orange Walk Police. Marcus has provided a urine sample to authorities and a notice of intended prosecution has been served to him. Police say they have taken a sample from Mendez to verify if he was drinking or not.

Flores was later released from the NRH. Meanwhile, the 34 passengers of the bus were escorted to Orange Walk by another bus. Police recorded statements from the passengers and they were later released. Police continue their investigation.