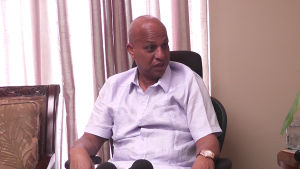 By Aaron Humes: It’s not quite 2016 yet, but Prime Minister Dean Barrow has released his official message to kick off the New Year.

Prime Minister Barrow stated that there are still reasons to be optimistic that Belize will have another successful year despite reduction in Petrocaribe flows and lessening earnings from local petroleum exports.

While he says that the landscape is changed and the dynamics will be different, he is confident that Government will be able to meet its obligations with only an increase in duty on fuel imports as the main additional source of revenue. He says that prices are still so low that it is “a bearable burden” for Belizeans.

The Government expects, nonetheless, to be able to meet the face of the coming step-up in SuperBond payments and the Compensation Award for Belize Telemedia Limited (BTL) expected to be handed down towards the middle of the year, as well as meet other debt obligations and pay for expansion in services, particularly regarding national security and the acquisition of assets such as three BDF helicopters and the two latest model Coast Guard boats.

In infrastructure, Prime Minister Barrow looked forward to plans for the Belize Infrastructure Limited (BIL)-financed sporting complex projects including the Belize City Center, the tourism road network projects for Lamanai, Cristo Rey-San Antonio, North Ambergris, Philip Goldson Highway from Airport Junction to Belize City; the new Macal River crossing; the Hummingbird Highway; a new link to the Airport and bridge to Mile 8 on the George Price Highway, and the road to Caracol,  and finally reconstruction of the George Price Highway from Belmopan to Benque Viejo. These projects will mostly be funded by various international lending institutions.

The message also featured plans for tourism on the back of ever higher overnight and cruise arrival numbers and new airline services from North and South America, and plans to appoint and official civil service monitor to implement and ensure quality control in Governmental interaction with the public.

Referencing the November general election, the Prime Minister concludes that his administration and Belizeans will meet the New Year with a burst of freshness, energy and enthusiasm, and invites all Belizeans to share his confidence.