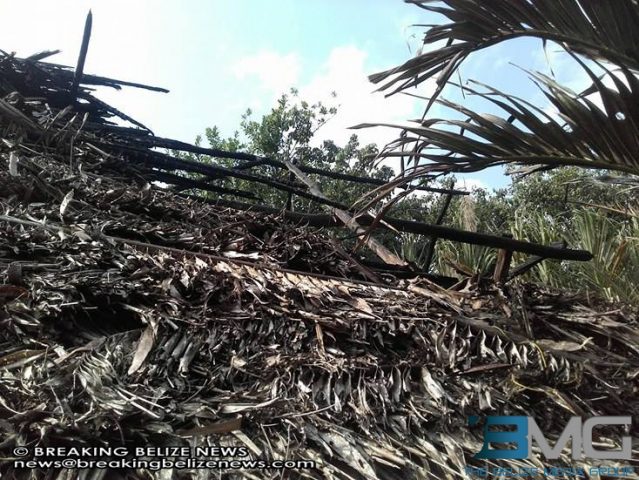 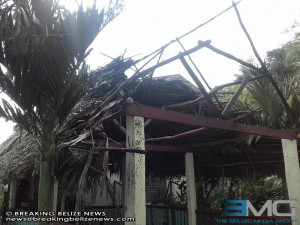 By Chrisbert Garcia: A string of arsons in Punta Gorda (PG) town early this morning has left one restaurant owner picking up the pieces after suffering thousands of dollars in losses and several other residents in distress, supposedly caused by one male person on a devious mission.

At around 3:00 this morning, a popular restaurant and bar in PG, belonging to Ignatius Longsville, better known as “Gomier”, who is a friendly and productive member of that municipality, was set ablaze, quickly destroying a large portion of a thatched roof eating area.

Gomier’s restaurant is the only one in PG that caters to vegetarian diets and sees a rush of local visitors as well as tourists each day, but now with the damages caused, he told Belize Media Group that he will be losing a lot of business during the time it will take to repair his structure.

Longsville, in an interview with our Toledo reporter earlier this afternoon, said that he has appraised the estimated cost of the damages to be around $6,000 and is trying his best to repair as soon as possible, so as to avoid losing more money while being out of operation.

When our reporter visited the restaurant, Longsville along with some helpers, 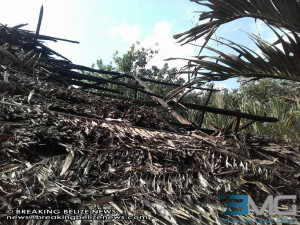 had already began the effort to clean up and repair the structure, even if only for temporary use, since he said that he is hoping to be able to accommodate a group of 26 that had previously made reservations for dinner tomorrow night.

Although he suffered a large loss, Longsville expressed his gratitude to the PG Fire Department for their quick response, which ultimately saved most of his establishment and minimized the damages which could have been much worse. He also thanked the police for being on the scene as soon as they were alerted and for detaining a suspect just a few hours after the incident.

Just a few feet away from that restaurant, the same culprit lit an Isuzu D-Max Pickup truck, belonging to a local Non-Governmental Organization, on fire, totally destroying it, which authorities believe was done before Gomier’s thatch was torched.

But the arsonist didn’t stop there, as he took his fire fever a few hundred yards away, where he attempted to light a family home on fire, then went across town to light another vehicle on fire near the cemetery area of PG. Luckily, the owners of the house noticed and were able to out the blaze before it spread and caused any serious damage. The second vehicle though, like the D-Max, was damaged by the flames.

Credited to quick police work, it has been confirmed that one male, in his early 20’s, has been detained and is expected to be charged for all four fires. At this time, the name of the suspect cannot be mentioned.