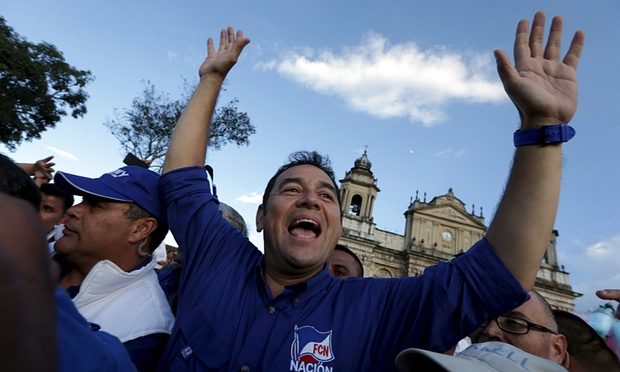 By Dalila Ical: After winning at the polls in a runoff on October 25th last year Jimmy Morales and his Vice President were yesterday evening sworn into office, after which he swore in a new Cabinet. A new Congress was also sworn in yesterday morning.

Belize Prime Minister Dean Barrow was present at the event.

Morales takes office at a time when Guatemala faces numerous financial and political challenges. Among the most pressing are poverty, which a reported sixty percent of the country’s population (some 16 million) faces; political corruption, as past President Otto Perez Molina was forced out of office following huge anti-corruption demonstrations and faces jail time along with his Vice President; and rampant crime.

Political analysts and critics say that his win is due largely to corruption that the country’s population grew intolerant of. As he takes office, there is much uncertainty on how he will be taking the country forward.

The Tico Times News reports those political analysts such as José Carlos Sanabria, a political analyst at the Research and Social Studies Association (ASIES) say, “There are high expectations because there is a need for him to promote changes in the country and solve people’s problems”. These analysts it adds “have warned he lacks a true political base”.