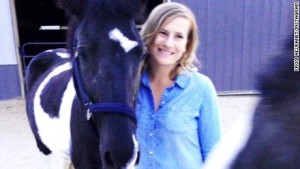 By Chrisbert Garcia: Latest reports in the murder case of 39-year-old American national and ABC 7 Chicago news producer, Anne Swaney, are that agents from the United States’ Federal Investigation Bureau (FBI) have joined in the investigation efforts to find the person responsible for her shocking death.

Swaney was found floating in the Mopan River near Nabitunich Resort, Cayo District, where she was staying for the course of her vacation and had gone out to do yoga in a secluded area of the resort’s horse trail, when she was viciously attacked.

A post-mortem examination determined that Swaney was strangled to death and with little clues to guide Belizean police, members of the FBI have been on the ground at the murder scene, offering assistance to local authorities.

According to an article on ABC 7 News’ website, FBI has also interviewed the owner of Nabitunich who took them through the day when Swaney went missing.

He told the agents that she carried out her normal daily routine of eating breakfast in the morning with her cup of coffee and then headed out to do yoga on a dock near the river bank, but when she failed to return after several hours, he contacted the police.

At this time, the Guatemalan National that was seen in the area when Swaney was murdered, has been charged for illegal entry into Belize and has still not been ruled out as a suspect in the incident.