WHO warns of Zika spreading, threat to unborn babies

By Aaron Humes: This evening Yohnny Rosado and his son Yohnny Jr. are out of work. While the elder Rosado is a well-known tour operator, about eight months ago the father and son started a tire selling business called Econo Tires on the Philip Goldson Highway. 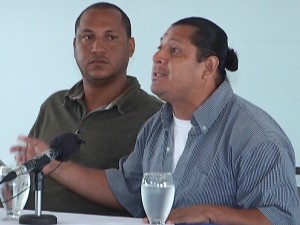 Today, however, representatives of the Belize City Council ordered the place shut down for lack of trade license. This is despite evidence, according to Rosado the elder, that they have applied for and are awaiting their license.

The younger Rosado told reporters that CitCo personnel came to order him to close the business this afternoon saying he did not have any authority to operate. He in turn told them that his father had all the documentation, but they still insisted on closing it down.

His father, meanwhile explained the headaches and hassles he went through to reach this point – the Council gave him a makeshift receipt in lieu of an official one as their systems were constantly down, but it was considered valid nonetheless.
Yohnny Rosado Sr. says he was never told to close the place down until today.

While he has acceded to the Council’s request, Rosado believes that because of his outspokenness on the tourism sector, his businesses are paying the price. Rosado says he imports tires and pays thousands of dollars in taxes, not to mention nearly 5 thousand dollars in property taxes for the property. We were unable to reach anyone at City Council for comment this evening.