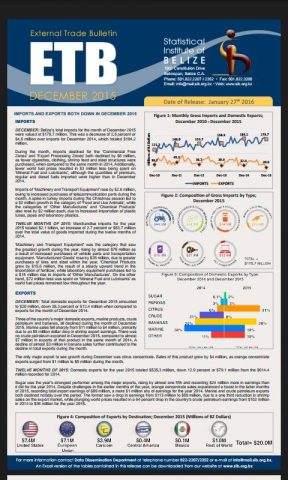 By Chrisbert Garcia: A release from the Statistical Institute of Belize (SIB) earlier today, showed that in the month of December 2015, prices fell for all three types of fuel compared to December of 2014,

with Premium gas down by 10 percent, Regular gas down by 16 percent and Diesel seeing the largest drop in price per gallon, as it decreased by 24 percent.

Food prices showed almost no changes although prices of various meats increased, since that was balanced out by a decrease in prices of red kidney beans and fresh vegetables such as onions and carrots.

In the category of “Housing, Water, Electricity, Gas and other Fuels”, there was a 2.2 percent increase in house rent but a 20 percent drop in electricity rates and a steep decline of 23 percent in Liquefied Petroleum Gas, which brought the price per 100 pound cylinder from $109.26, down to $83.88.

As may be observed in this breakdown, there was an overall decrease in consumer prices during December of 2015 when compared to the same month in 2014, except in the municipalities of Dangriga and Punta Gorda town where home rental, as well as food prices were the highest with increases of 2.7 percent and 1 percent respectively. On the contrary, Belmopan City had the largest decline with a total inflation rate of negative 2.9 percent.

The release also offered statistics for imports and exports compared in the same time period as consumer prices, which showed that there was a decrease of 2.5 percent ($4.6 million) in imports and a 38.3 percent ($12.4 million) decrease in exports, attributed to marine products, crude petroleum and bananas.