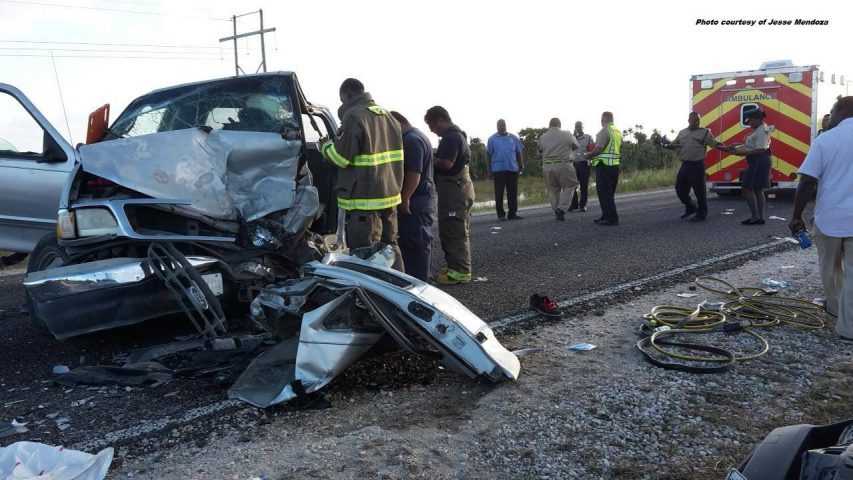 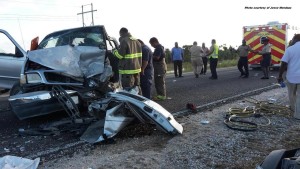 By Chrisbert Garcia: A traffic accident between miles 17 and 18 on the Philip Goldson Highway yesterday afternoon around 3:50, resulted in 11 persons being injured when a Toyota passenger van carrying tourists and a Ford F-150 pickup truck, collided head on, landing one, Emilie Siman, in a critical condition at the Karl Heusner Memorial Hospital (KHMH).

Police arrived on the scene to see both vehicles with extensive damages to their front portions. Driver of the Ford pickup, 47-year-old Egbert Ferguson was trapped inside his vehicle with a broken left foot, five females inside the Toyota van complaining of pain, and five persons, including the driver of the van, 22-year-old Rogelio Reyes, lying on the shoulder of the highway in pain.

Investigation revealed that while traveling to in the direction of Belmopan, the pickup truck going in the opposite direction, swerved into the left lane and collided into the van’s front portion, causing injuries to all six French Nationals inside and everyone else involved. At the time, Ferguson was carrying two male minors and 44-year-old Daisy Olivera.

All persons were taken to the KHMH for treatment and released, except Ferguson who was admitted and Siman who remains in a critical condition. 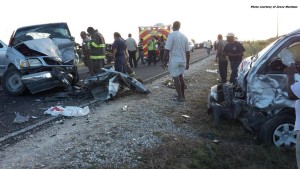