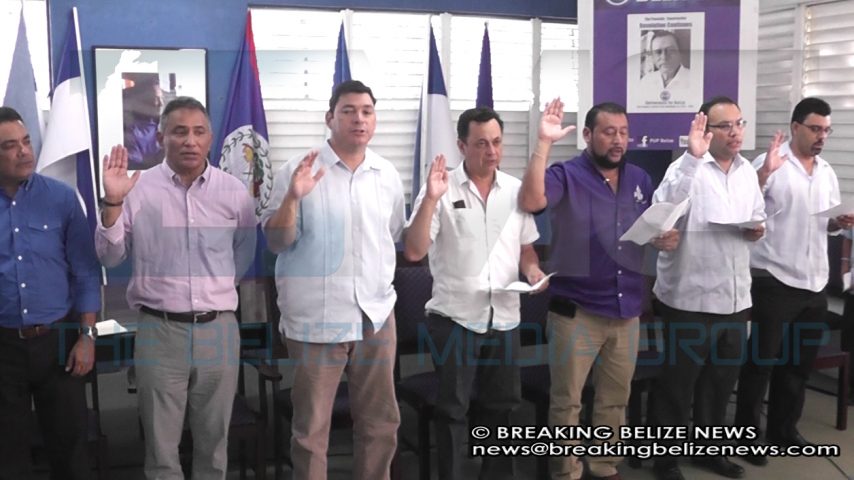 By Aaron Humes:  Guess who’s back!

Four years after stepping down as party leader of the People’s United Party (PUP), Juan Antonio Briceño, known to all as Johnny, has returned to the driver’s seat at Independence Hall.

This morning, he and the new members of the party’s national executive were sworn in at party headquarters by former representative, Sam Waight. Afterward he told the gathering that after an exhausting campaign, the task now is guide the party back onto the right path.

Next, Briceño addressed the issue of unity, saying that the party has delivered what its supporters have asked for, and the next time they go to Belmopan, the hope is that they will be the Government of Belize.

Briceño told reporters that the party must hit the ground running to address key national issues.

After being sworn in Briceño took questions from the press. He first addressed the matter of correspondent banking relations. Suggesting that Prime Minister Dean Barrow had “failed” in his trip to Washington, D.C. to get real help to address the situation, Briceño said that Belize needed to reach out to its regional brothers and sisters to address an issue that hits high and low alike.

Speaking more generally on crime and the economy, Briceño referenced the double murder of two youths in his native Orange Walk Town on Monday and the ongoing problems in our various industries as evidence of his opponents having no concrete plan to solve Belize’s problems.

On internal matters, Briceño said that the PUP plans to put its communication assets – Vibes Radio and the Belize Times newspaper – as well as Independence Hall, the party’s headquarters, in a trust for the benefit of the party’s supporters, after negotiations between Briceño and past party leaders Francis Fonseca and Right Honorable Said Musa.

Briceño will be sworn in as leader of the Opposition tomorrow, and there are discussions planned as to the future of the party’s Senators – Lisa Shoman, Anthony Sylvestre Jr. and Jason Patrick Andrews.