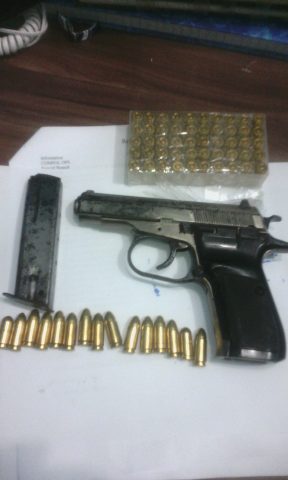 By BMG Staff: On Saturday February 6th, Orange Walk police confiscated a nine-millimeter CV-83
Browning pistol from a residence in that town.

The Formation’s Quick Response Team searched the house of

Mavis Wade, a Belizean seamstress on #25 Saint Peter’s Street and found the weapon hidden in a stock of books.

Police say the books had been cut to create a squared space in the middle where the gun was hidden.

Police say the serial number of the weapon had also been filed off. Also, along with it, officers found 13 bullets inside a white sock and 52 live .380 rounds.

Present with Wade at the time of the search was Steven Hyde, a Belizean student of the same address.
None of the residents could produce a license for the weapon and bullets.
Both were arrested and charged for ‘kept firearm without a license’ and two counts of ‘kept ammunition without a gun license’.