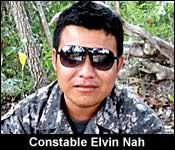 By Aaron Humes: Tonight another interdicted police officer hailing from the San Pedro Police Sub formation is free from a charge of extortion after a San 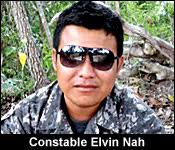 Pedro resident had accused him of extorting the sum of $400 from him back in July 2014 on San Pedro but failed to show up in court today for trial.

Constable Elvin Nah saw the charge of extortion struck out today in the court room of the Chief Magistrate, Anne Marie Smith for want of prosecution.

The alleged victim, San Pedro resident, Calvin Flowers, 32 then, a Boat Builder of the island alleged that he paid PC Nah $400 in exchange for his freedom and no charges after he was allegedly caught with 4.0 grams of marijuana and the office told him that he and another friend would jointly be charged with possession of controlled drugs.

But Flowers did not show up in Court #1 this morning, and the prosecution was forced to give up. Constable Nah’s attorney, Anthony Sylvester, says his client intends to file a civil suit against Flowers.