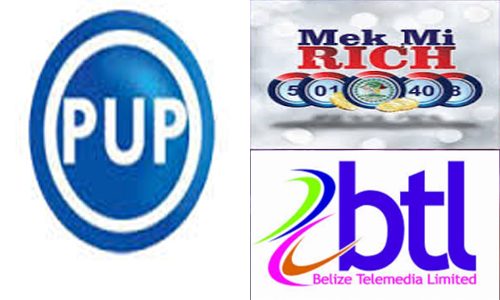 By BBN Staff: “The People’s United Party registers serious concern at what amounts to no less than a

conviction of BTL, or persons acting on behalf of BTL, on charges of corruption,” the party said in statement issued late this week.

The party goes on to register concern that no investigation has been announced into the “shady” business between Mek Mi Rich (MMR) and BTL, which was stated by Supreme Court Justice Courtney Abel.

Last Monday, Justice Abel found that BTL had breached a confidentiality agreement with Curtis Swasey, misappropriating his concept for a lottery show and started a new company with the same idea.

BTL lost the case but the PUP is not satisfied. “The success of BTL hinges on its corporate integrity, and the decision by the Judge speaks directly to that integrity, or lack thereof. Those at BTL responsible for stealing a concept and peddling it should be called out. At the very least, heads should roll,” the PUP demanded.

But the PUP doesn’t stop there and notes political connections between MMR and BTL: “Chairman of the Executive Committee of BTL is Anwar Barrow, son of the Prime Minister. One of the Directors of MMR is Andre Vega, son of the Deputy Prime Minister.”

In conclusion, the PUP “demands an immediate and impartial investigation into the corruption at this company which belongs to Belizeans – into not only the matter of the MMR fiasco but other reports of corruption surrounding financial decisions made at the Board level.”