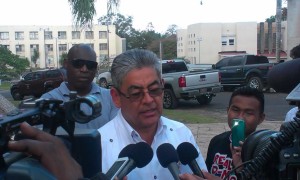 By Dalila Ical: Gaspar Vega, Minister of Agriculture, Forestry and Fisheries, said his main reason for resigning his position in the United Democratic Party (UDP) and choosing not to run for election again is his family.

Vega, in an interview with the media today, said that over the last year his political life has taken a toll on his personal life, particularly as it relates to his wife and children.

“The last year and a half has been really, really difficult for us, you know with this, stupidity of the charge they made on my character. It was really rough. A lot of people, I don’t think, realize that it is. It’s just that I’m not a cry baby. I try to handle things in the most mature manner,” he explained.

And Vega said that it is with that same maturity that he made the decision and announced it now rather than later. He went on to say that he thought it was the best thing to do, to give the people of Belize but most importantly the people of Orange Walk North enough time to search for the most appropriate candidate to take over his position.

But his resignation took everyone by surprise and naturally speculations rose. Today, Vega clarified that he intended for it to be a surprise because if he had consulted his party he would have been advised differently.

Still, speculations remain and when asked whether his decision had anything to do with his previous portfolio, particularly the Lands Department, having been taken away, Vega responded saying, “Whatever I say it will create other speculations so rather say that what I put on the letter was the essence of what I meant.”

But while Vega has made up his mind and his party has accepted it, the constituency he represents has been a hot spot in the political arena and has been a stronghold of the UDP. His last opponent, Ramon Cervantes who contested the seat for the People’s United Party (PUP), was perhaps his strongest yet.

Even so, Vega said, “I don’t think we will be having as big of a challenge as people might think in getting a suitable candidate to ensure that the division stays for the UDP. You have to remember that in that division we had the highest turnout in the entire country, more than 84 percent of the registered voters came out to vote.”

And as he serves his last term in parliament, Vega says he will continue to support the UDP financially and otherwise as he had been doing long before he was elected because he needs, “to ensure that Orange Walk North remains for the UDP…I definitely don’t want a PUP government,” he concluded.