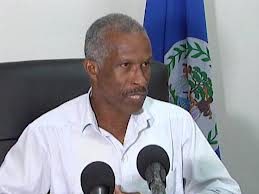 By Aaron Humes: The Belize Defence Force has written National Security CEO George Lovell providing an update on the shooting incident inside the Chiquibul Forest Reserve on March 26th. That is when Staff Sergeant Richard Lambey was shot near Camp Valentin.

According to the report referenced by Channel 5 on Friday, the BDF’s patrol was on a resupply mission at the only water point in the area, located within Belizean territory some 3 hundred 34 meters from the border.

That mission was headed by Staff Sergeant Richard Lambey. One of the important details about the incident is that they may have been deliberately ambushed by seven men, believed to be Guatemalan nationals.

These men divided themselves into three groups and according to the report, each group had what appeared to be a point twenty-two firearm. There was an exchange of fire in which Lambey was injured. But according to the report, the other members of the BDF patrol did not witness that exchange of fire. In that regard, a question has been raised as to whether Lambey was alone at the water source when he was injured.

Other interesting details come from a search of the area the day after the shooting.  Twenty-six expended cases belonging to the BDF and only one point twenty-two empty case was discovered. The latter is believed to be from the opposing armed men, so there are questions as to who fired the other shots and whether his own fellow officers may have shot the Staff Sergeant, if only by accident.

At this time, we do not know if authorities have determined what bullet type hit Lambey. It is also being reported that the ambush may have been in retaliation of the arrest of Elder Esduardo Espana Perez on March third, 2016.

The BDF report states that, quote, “future unfortunate incidents may not necessarily be by means of an ambush, but by means of poisoning the patrol’s water source.” End quote.

Lambey has been treated for his injuries and was released from hospital this week. The matter is under investigation by the Organization of American States’ border office.