Charged for unlawful sex with minor

By Aaron Humes: The upgraded criminal code statutes on rape now include oral penetration of the victim.

42 year old plumber of Belize City, Irvin Pitts, has been charged for intentionally and unlawfully
penetrating the mouth of a woman whom he was supposed to drop off at home this past Saturday.

According to the woman, on Saturday morning, around 3:00 a.m., she was in the company of her sisters after a night out clubbing, and that Pitts was to drop her off at home. 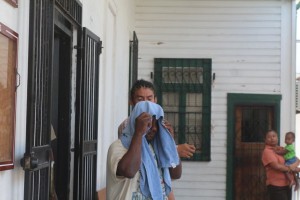 She said that he first took her two sisters home, but when it was time to take her home, he diverted and told her he had to go back to his house for something. Upon arriving he got out and left her in the vehicle waiting for at least 30 minutes, She became annoyed and left the car, going to the front entrance of his house. Pitts, she alleged, ambushed her from behind, pushing her into his house and she fell to the ground.

He then tried to rape her and that is when the woman told him that she was having her menstrual period. He then demanded oral intercourse instead and she gave in for fear of her life.

When she was done, Pitts took her home and told her not to say anything to anyone. However, the woman told her parents who then called in the police to make a report. Pitts was picked up by police and charged with one count of rape.

In court, no plea was taken from Pitts, who was unrepresented, but due to the nature of the offense, he was denied bail and remanded into custody at the Belize Central Prison until June 6, 2016.

Chief Magistrate Ann-Marie Smith has ordered that Pitts be provided with disclosure in the matter by June 6, 2016 and his case is expected to go to preliminary inquiry on July 14, 2016.