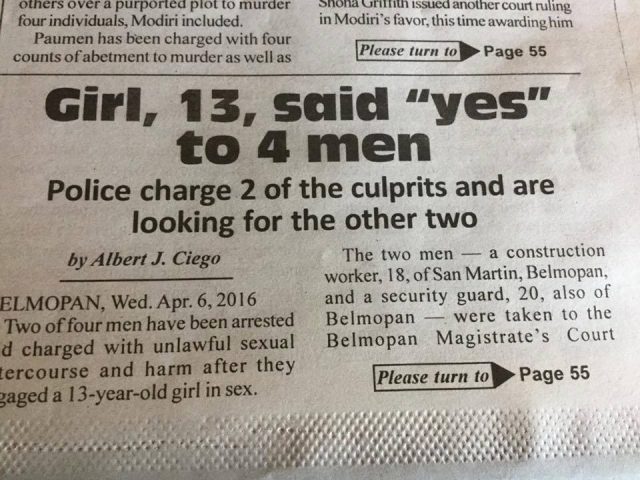 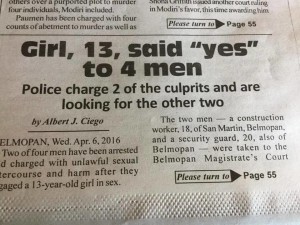 By Aaron Humes: Earlier this week a release came out of the National Committee for Families and Children (NCFC) in relation to the recent incidents of abuse against two girls.

While expressing concern for the particular child, a 13 year old girl, who is said to have had intercourse with four men, two of whom have been arrested, it took issue with the Amandala newspaper’s headline on the case, “Girl, 13, said “yes” to 4 men”, saying that it, quote, breaches the professional ethics for responsible journalism and serves to re-victimize the child rather than discouraging and deterring such hideous act.

Therefore, NCFC advises all media personnel to be careful when reporting or sensitizing the general public regarding any issue involving children. End of quote.

In this weekend’s edition, the newspaper’s editor responded via a note attached to the printed release, beginning on page 54.

That note states that the headline is factually correct, and that the newspaper, quote, did not deny the victimhood of the child who said yes, merely reported the fact that she did so, regardless of consent. End quote. A child under 16 cannot consent to having intercourse on their own.

However, the note continues questioning the NCFC for not expressing similar outrage over recent cases like the 13 year old raped by her stepfather and suffering from cerebral palsy, or the mother who lost her dead baby after authorities apparently threw it away despite her wanting to give it a proper burial.

Instead, Amandala says, it has chosen to have a “knee-jerk” following reaction to the outrage of the Special Envoy for Women and Children which had spoken about the matter on Facebook earlier this week.

The newspaper maintains that the objective of the headline was to draw attention to the fact that statutory rape is still rape, and that the yes of a minor is still no.