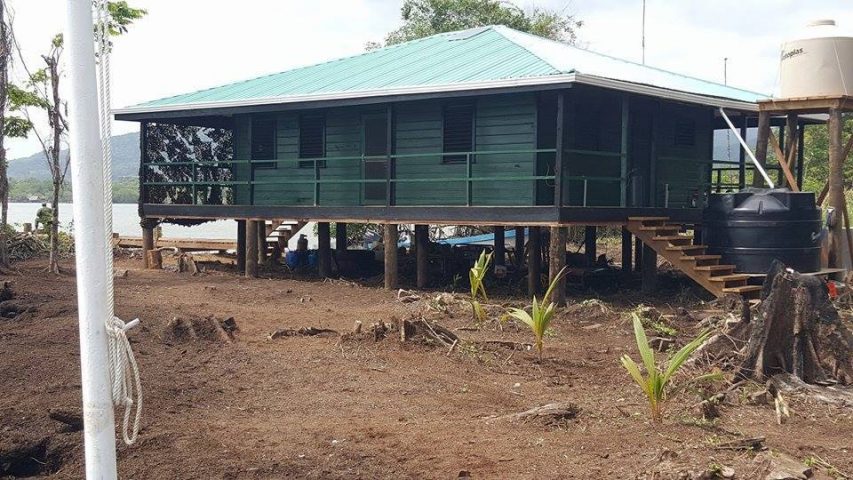 By Dalila Ical: Minister of National Security, John Saldivar and high ranking officials of the Belize Defense Force (BDF) and Coast Guard joined other dignitaries in officially opening the Forward Operating Base (FOB) at the mouth of the Sarstoon River today.

The base is expected to strengthen the maritime capabilities of the Belize Coast Guard and BDF in the area.

BDF Commander, Brigadier General David Jones said the BDF has wanted the base for over a decade to address concerns over sovereignty and territorial integrity. He added: “This location is excellent as it offers a clear line of sight to the open seas approaching the Sarstoon River and also excellent view of activities entering and exiting the river.”

Recently, tension has grown between the Guatemalan Armed Forces (GAF) and the BDF as well as civilians who have visited the area as part of excursions organized by Belize Territorial Volunteers (BTV).

Saldivar said that while “the north of the midpoint of the Sarstoon River is the boundary of Belize. There is no doubt and has been no doubt in our minds that the Sarstoon Island lies within the territory of Belize.”

The new base will enable trained forces to further deal with maintaining sovereignty and integrity in an area that is under conflict.

But while GOB remains concerned about the seemingly growing tensions in the area,  Belize remains committed to peace agreements Saldivar said and GOB expects Guatemala to respect and honour Belize’s sovereignty.

Jones added that the base is not there to act as an opposing post to Guatemalans who are located directly across and that the BDF “will endeavour to work with them on a principle of mutual respect and cooperation as we share an international boundary. Despite our country’s political differences we will continue to work as professionals despite the seemingly complex nature we have to work under than can result to tensions.”

The location was selected for its suitability as soldiers can live in adequate conditions and can better conduct their functions in an area where they have encountered numerous activities of encroachment, illegal logging and drug trafficking during change overs at the Cadenas Observation Post at the south-western most part of the border.

The facility can accommodate dozens of law enforcers said Saldivar and they hope to keep improving the area for the soldiers.

Salivard added that other projects are in the pipeline. Monies have been allocated for the completion of an FOB base on Hunting Caye and the state of the art facility will allow Belize Coast Guard and other law enforcement agencies to launch operations to secure northern section of Belize. Bids for contracts for that facility were opened recently.

Other plans include the construction of sector one headquarters for four additional stations for the Belize Coast Guard at South Big Creek, Northern Ambergris Patrol Base, Punta Gorda and the Consejo Operating Base. Customs will join officers in the last facility. Additionally plans are underway to acquire two large patrol boats.