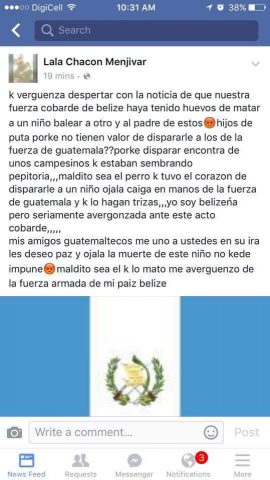 By Aaron Humes: A Belmopan bar owner has lost face after having to retract a social media statement in which she appears to go after the Belize Defence Force for their actions in the death of the Guatemalan minor in the adjacency zone on Wednesday. 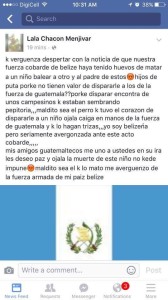 According to the Reporter newspaper, Lala Chacon Menjivar, owner of La Cabana bar, wrote in her original post in Spanish that the shooter of the child was cowardly. She made further insults and wished that whoever was responsible be made into minced meat by the Guatemalans.

She went on to say that she joins her Guatemalan friends in anger at the scenario, and ended the post with a picture of the Guatemalan flag.

However, the post was quickly removed following negative commentary in response; although it was not quick enough to prevent reposted screen shots of the original post and translation of the original Spanish text.

Responders most strongly reproved Menjivar and patrons of the bar commented that they would no longer go to the establishment and encouraged other Belizeans to do the same.

Menjivar proceeded to post, in English, apologies for her comments, explaining that she acted out of anger. She ended that post with a picture of the Belizean flag.

Having been made aware of the first post, Omar Arzu, founder of Cloud 9 Sounds, a sound system group that plays music at La Cabana on a regular basis, posted that neither himself nor his agents would continue to play music at La Cabana.