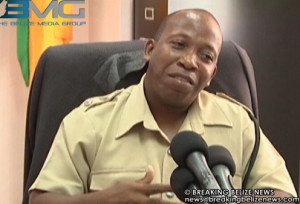 He was shot this morning at the corner of Curassow and Gibnut Streets, not far from the scene of an unrelated incident reported this weekend which resulted in two men being injured. Police are seeking one person of interest.

Cole, unfortunately, died of his injuries about two hours after the shooting. But Assistant Commissioner of Police Chester Williams, Officer Commanding Eastern Division (South), this afternoon pointed the finger at a neighbourhood clinic which he said could possibly have stabilized and saved Cole’s life, but refused to do so.

According to Williams, Cole ran into Universal/Integral Clinic seeking treatment while under blood, but was refused and shut out.

Police investigations have gathered so far that Cole was on bicycle, riding toward Curassow Street from Central American Boulevard when he was ambushed by his attacker and shot twice following a struggle.

Williams refused to comment on any criminal association except to say that it was part of the Police’s investigation and that he would respect the victim’s memory by not tarnishing his name further.

As for the clinic, we understand that the persons in charge were in fear of more shooting if they had admitted Cole. Williams said he would leave that to the Belize Medical and Dental Association to address.