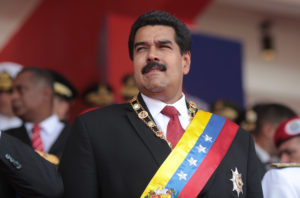 By Aaron Humes: According to the L.A. Times, police and opponents of President Nicolas Maduro clashed on the streets of the capital Caracas after Maduro threatened to make the opposition-controlled National Assembly “disappear.”

Maduro’s threats, scattered looting and growing protests over hyperinflation and food scarcities underscored the deepening unrest and polarization in this oil-rich but cash-strapped country, the Times writes.

Maduro on Friday decreed a state of emergency, but the National Assembly subsequently voted it down as uncalled for.

Several protesters were arrested and at least one injured as police used tear gas to disperse a march to the national electoral council. Opposition leaders had planned to formally protest there the slow pace of a review of signatures on petitions backing a vote to recall Maduro. A similar march last week also was blocked.

Marchers carried signs reading “dying of hunger” and “there is no food.” Fearing a violent confrontation, stores along the march route were mostly closed.

As the food crisis continues and lines at markets lengthen, social media reported that looters broke into markets Tuesday night in Los Teques and Guarenas, both suburbs of the Caracas metropolis. Medicines and other vital products are in short supply.

In an attempt to impede attendance at Wednesday’s march, Caracas closed 14 subway stations, apparently on the orders of Mayor Jorge Rodriguez, a Maduro ally. He previously had said he would not permit the march to take place.

In a news conference Tuesday night at the Miraflores presidential palace, Maduro said it is “just a matter of time” before the assembly “disappears,” although he didn’t offer details on how that might happen.

“I don’t think any Venezuelans expect anything good from the National Assembly,” Maduro said. Referring to the opposition, he said: “They don’t want a recall, they want an overthrow.” He said the recall campaign was illegitimate because it started too late in the assembly session.

The heated rhetoric was matched by opposition leader Henrique Capriles, a former presidential candidate and current governor of Miranda state who said Maduro’s apparent intention to go through with an emergency decree was unconstitutional. If the president tried to enforce the decree, Venezuela’s military might then face a “moment of truth.”

“Decide whether you are with the constitution or with Maduro,” Capriles said, referring to military leaders. He also urged Venezuelans to ignore any measures related to an emergency decree, since the National Assembly vote had made it illegitimate.

After the vote on Tuesday, Allup said the decree was an effort to divert Venezuelans from the “weakness” of Maduro’s government and that imposing emergency measures after a congressional rejection would be would be unprecedented.

“No one has ever dared to do this. He must be in a very desperate and weakened situation,” said Allup, who helped organized Wednesday’s protest march.

Almagro responded in a statement Wednesday saying the traitor is Maduro.

“You betray your people and your supposed ideology with your rambling tirades,” Almagro said. “You are a traitor to ethics in politics with your lies and you betray the most sacred principle in politics, which is to subject yourself to the scrutiny of your people.”