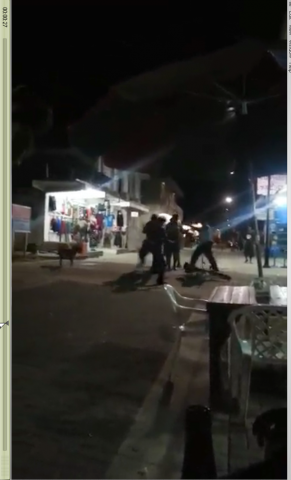 By Aaron Humes: San Ignacio police are investigating a reported case of police brutality said to involve no less than a relative of the commanding officer for the town, Superintendent Richard Rosado.

However, the alleged victim has refused to make an official report, and is now charged along with another person for his role in the incident. 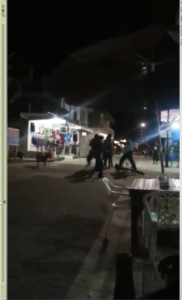 Police confirmed late this evening that the first man is charged with obstruction, assaulting a police officer and having an unmuzzled and ferocious dog. A companion was charged for possession of controlled drugs.

The case came to light after a controversial video went viral on social media, in which officers are alleged to have brutalized the alleged victim and a dog on the main street in town, Burns Avenue on Friday night.

In the video, the officers can allegedly be seen hitting a man in front of them and in the process a dog walks by and is also beaten. The dog can then be heard screaming in agony.

But according to Superintendent Rosado, police were conducting a search for drugs on the man, who is known to the Department. Investigators twice visited the person’s house today but he declined to make an official report.

Superintendent Rosado reminded that Commissioner of Police Allen Whylie has instituted a “zero-tolerance” policy for police brutality and any evidence of same is welcome as part of the Police’s attempts to keep themselves clean.