Moisture is increasing over the area

Chamber, NCC agree on dates for Carnival and Expo 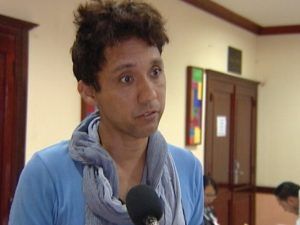 By Aaron Humes: According to Caleb Orozco, president of the United Belize Advocacy Movement (UNIBAM) and chief litigant in a case pending judgment in the Supreme Court against Section 53 of the Criminal Code concerns penalties for same-sex encounters, the Caribbean Court of Justice case launched by Jamaican attorney and activist Maurice Tomlinson against Belize and Trinidad and Tobago will have a decision next week Friday, June 10.

According to the CCJ notice attached to the email Orozco sent this afternoon, the decision will be handed down by video conference at 11 a.m. Trinidad time, an hour ahead of Jamaica and two hours ahead of Belize.

As for his own matter, Orozco notes that judgment was reserved in May 2013, but three years later there appears no sign of notice for a decision.

Orozco comments, quote, The Constitution of Belize does not state expressly a timeline for completion of judgments, but there are certain constitutional principles which guard the public in respect of excessive delays in the delivery of judgments. So much for those principles.

What do you do when the head of the judiciary is the one holding up justice, well you complain to the Judicial and Legal Service Commission, but who chairs that Commission, it seems the Chief Justice. Furthermore, what happens to an estimated 36 cases that maybe under his portfolio, well, it languishes. It seems even the bar is concern and is seeking to confirm that number. End quote.

Orozco complains that as a Belizean citizen, his fundamental rights are being so easily thrown under the bus, and asks the media to hold the Chief Justice accountable for the tardiness of his decisions and exposing what he calls the weaknesses in the judiciary.