Moist and unstable conditions will continue 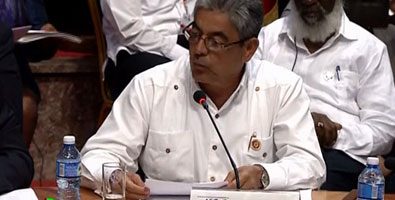 By BBN Staff: Outgoing Deputy Prime Minister Gaspar Vega, during the 7th Summit of Caribbean States in Cuba over the weekend, addressed the current status of the Guatemalan territorial claim over Belize in front of diplomats from all over the region.

Vega, who was also accompanied to the summit by Foreign Affairs Minister Wilfred Elrington, reportedly told those in attendance that Guatemala is in violation of the Cumbre de la Comunidad de Estados Latino Americanos (CELAC) agreement.

Guatemalan President Jimmy Morales was also present at the summit and was reportedly not pleased with the exchange. Morales, who was accompanied by his own Foreign Affairs Minister Carlos Raul Morales, reportedly told the gathering that the summit was not the right forum to discuss the matter. He said that the matter should be taken to the International Court of Justice (ICJ) and be settled there instead.

There are also reports that Guatemala’s Foreign Minister Morales was also unhappy with the exchange and President Morales’ response.

The Government of Belize has not released any information regarding the summit or Vega’s remarks. There is also no information suggesting Elrington addressed the issue at the summit.