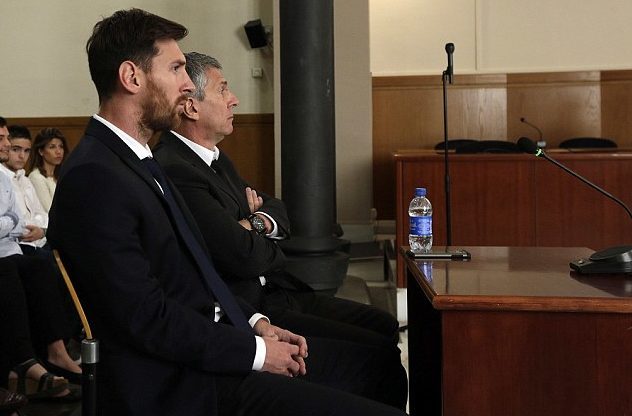 BY BBN Staff: International football star Lionel Messi, along with his father, was sentenced by a court in Spain on Wednesday to 21 months in jail for tax fraud. The prison sentence, however, is likely to be suspended since Messi is a first time offender and the conviction is for a non-violent crime with a sentence of less than two-years meaning Messi won’t spend any time in a cell. He will most likely be placed on probation.

The Barcelona court found the Argentina international star and his father Jorge Horacio Messi guilty of using companies in Belize, Britain, Switzerland and Uruguay to avoid paying taxes on 4.16 million euros of Messi’s income earned from his image rights from 2007-09.

The court found Messi and his father, who has managed his son’s affairs since he was a child, guilty of tax fraud and ruled that for each of those three years they should serve a sentence of seven months.

Messi, 29, a five-time world player of the year, was also fined 2.09 million euros while his father was fined 1.6 million euros.

They can appeal the decision to Spain’s Supreme Court.

Messi told the court during the four-day trial that wrapped up on June 4 that he trusted his father with his finances and “knew nothing” about how his wealth was managed.

The ruling is a black-eye on Messi’s reputation. It is also a black-eye on Belize’s already struggling banking and finance sector, which is battling the effects of de-risking.