Crime still on the rise in 2016, police have much work ahead

By BBN Staff: Crime through the first half of 2016 has not seen a reduction from the previous year, according to new statistics released by the Belize police department. 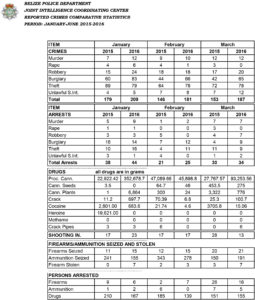 For this year from January to June, there has been one more murder than during the same time in 2015. The total murder count through to June is 74. There have already been several murders since the start of July, however, indicating that the murder count may be even higher in comparison to last year’s up to this point.

Through to June though, the Belize district had 13 fewer murders than during the same period last year. Cayo, Corozal, Stann Creek and Toledo each had more murders than the previous year.

The police also reported one more shooting incident during the same period than in 2015.

And while the total amount of major crimes has gone up by nearly 5 percent, there have been decreases in several categories.

There were less cases of rape, robbery and theft than in the same period in 2015. Cases of burglary and unlawful sexual intercourse are up by 20 percent and 24 percent respectively in 2016.

Police reported an increase in arrests from January to June: 170 to 190 but there were fewer arrests for murder when compared to 2015.

And while the numbers may suggest that the crime situation isn’t much worse than last year during the same period, there certainly is a sentiment that the nature of crimes committed have become alarming.

In the last few months Assistant Commissioner of Police Chester Williams came under fire, quite 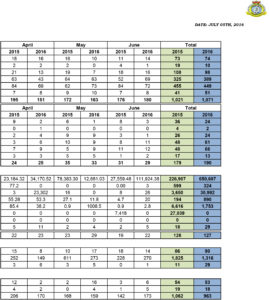 literally being shot at by criminals he pursued while in another instance a youth opened fire on a repudiated gang figure in broad-day during rush hour at the country’s largest police station. And sure, these may have been isolated incidents for the most part but in a generation of youth becoming increasingly desensitized it is scary to think what might come next.

The majority of violent crime in the country, and particularly in Belize City can be attributed to gang warfare and this is the reason the police department, in specific the Easter Division’s Southern Command has engaged in mediation efforts. These efforts were criticized by social researchers recently but Williams defended the mediation sessions. But beyond that back and forth, Williams raised a solid point, that social researches, for all their wealth of knowledge, should lend a hand to the police department to better organize and execute these efforts.

Earlier in 2016, Belize City had remained calm until the death of George Street leader Gerald “Shiny” Tillet. After his murder there was a surge of violence that followed and has carried through. So while the mediations may not be the most effective, it appears as if they have had at least some sliver of an effect with Belize district having 13 fewer murders than in 2015. It’s also worth noting too, however, that Tillet was killed in Dangriga.

Still, it remains, the police department must continue its efforts to better relations with the public and must become more effective. What is also obvious is the low number of arrests and even lower number of convictions. This must also become a priority for the department. The public needs to feel safe and trust that justice is served the same across the table, regardless of status, however, that is easier said than done.