Little girl dragged down into river by crocodile

Suspects charged for pastor’s murder; ringleader linked to many scams

By BBN Staff: According to police, at 8:45 p.m. on July 15th, they visited an establishment located in the Industrial Site area Belmopan where Police conducted a search on a male person who identified 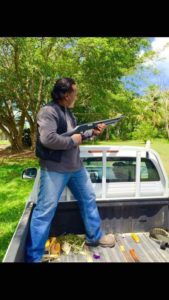 himself as 46-year-old William Mason AKA Ted Ouellet, who at the time was accompanied by 20-year-old Ernest Castillo, 29-year-old Keron Fernandez, Ashton Vanegas and 30-year-old Terence Fernandez.

Guyanese-born Mason is said to have obtained a birth certificate stating he was born in Crooked Tree Village, Belize District, Belize. The paper was issued in June 2015, and within a month he applied for a gun license claiming to be a Belizean; however, his birth particulars were omitted from the application. Who assisted him with all of this is not yet clear.

Meanwhile, an investigation done by Breaking Belize News appears to link the man known as William Mason, currently in Belmopan police custody in connection with an ongoing investigation and suspected of involvement in the death by decapitation of Pastor Llewellyn Lucas to online threads involving accusations of several scams perpetrated against innocent victims spanning several countries.

In Belize, he is associated with a business dedicated to tourism.

He has several business partners and moves carefully and creatively, ensuring that police are unable to stop him.

Our research found links to a Canadian modelling agency that has welshed on contracts; an attempted scam of Thai customers by posing as a U.S. millionaire businessman seeking money for a business deal; an attempt to seek patent for the ICloud online storage mechanism, forcing Apple to post a warning against those attempting to steal passwords from Chinese users; and establishing a medical resources facility worth US$25 million in his native Guyana.