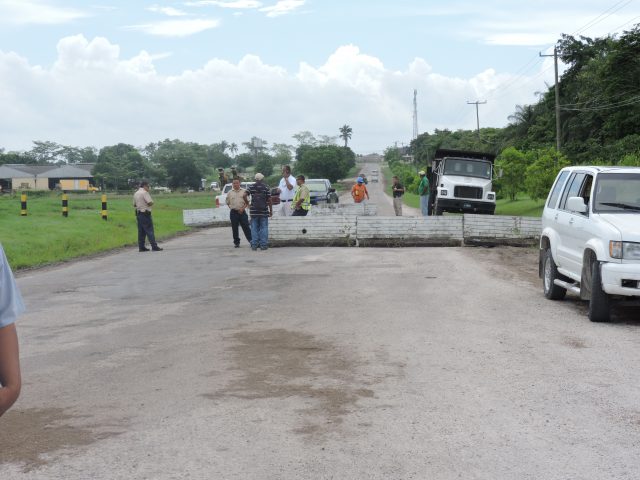 By Dalila Ical: Sugar Cane farmers refuse to share the loss of costs after BSI lost close to 4,000 tons of molasses earlier this month.

A handful of cane farmers held a peaceful protest at the junction of the Philip Goldson highway and the entrance to BSI, holding placards expressing their rejection of BSI/ASR’s suggestion that they shoulder part of the loss.

Mac McLachlan, ASR’s Vice President of International Relations said to the media that the loss was in fact no one’s fault refuting suggestions that the loss was the direct result of factory employee’s or BSI’s negligence. “Nobody was directly culpable for this, certainly not BSI, and as a result sometimes in this industry we get losses sometimes we get benefits. This year we managed to get much cheaper shipping contracts than we have had in recent years, which is a direct benefit for cane farmers.”

McLachlan explained that the same operating procedures that have been in place for years were properly followed. He goes on to say that the molasses in tank number one suffered a Maillard reaction, a chemical reaction that is caused by a number of factors. One of these was the high level of reducing sugars contained in the molasses and dextran. 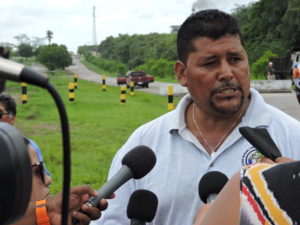 Of course that has not sat well with farmers. BBN understands that association leaders have held meetings since Monday to discuss the situation, and other matters, and those meetings continued today. A handful of farmers, led by Alfredo Ortega Chair of Orange Walk Branch of the Belize Sugar Cane farmers Association showed up this morning at BSI with placards. They were met by BSI security personnel and the police were also present.

Ortega says “it was under their care that this material was damaged…and…they didn’t even have the courage to immediately inform the associations of the situation.” As a result, Ortega adds, since the material was under BSI’s care, any and all losses should be absorbed by the milling company.

BSI’s McLachlan disagrees. “It’s to do with the way the Commercial Agreement is established where the cane payment is based on the value of the sugar and the molasses sold and that is an agreement that’s been in place for a long time now…in that case when there’s an industry loss like this then everybody shoulders their burden of that loss,” he said.

What this means simply is that the lost molasses would have guaranteed farmers an additional 22 cents more per ton of cane delivered. Now that that is not there, their payments will be less. Ortega argues that there is nothing in the commercial agreement that compels farmers to incur losses suffered at the 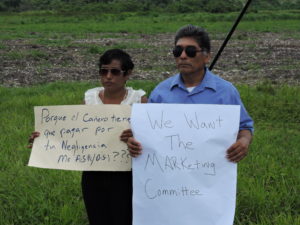 factory. He adds too that the losses will be more upon their third payment, since the investigation has not been concluded, saying “the losses will be much more and that is why we are not in agreement that farmers should bear any loss of the product because if the farmers brought the material to the mill, the material showed that it was a quality material being delivered to them…they should bear the responsibility.”

But McLachlan reassures farmers that the third payment to farmers will not be affected saying “we don’t believe it will, I think we’re pretty near the end of that investigation.”

But the situation has once again thrown the farmers and BSI into yet another faceoff. BSI officials, however, believe the situation is being aggravated by misleading information, despite their best efforts to circulating all necessary information to clarify the problem. “We can only put out there all the facts, all the arguments in the case. If others chose to twist those, ignore those really, that’s not our responsibility. All I would ask is that those who are leaders in this industry, and I include in there political parties as well as association leaders, to try to come together to discuss in a constructive way solutions to industry problems,” he said.