ADVISORY NO. 3 of 2016 Strong and Fast moving Tropical Wave in central Caribbean 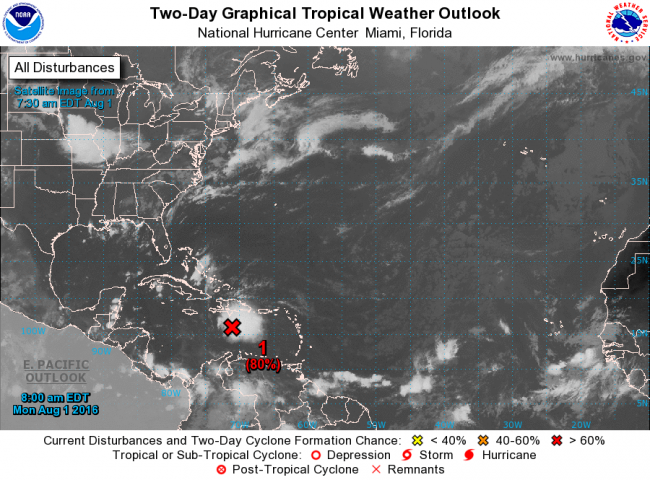 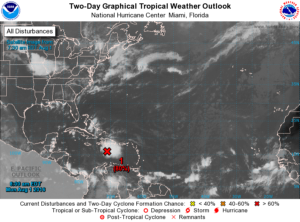 By BBN Staff: The National Hurricane Center (NHC) in Miami, Florida has predicted thunderstorm activities associated with a strong tropical wave located over the central Caribbean sea about 350 miles East-South-East of Kingston, Jamaica that continues to organize.

According to the NHC, earlier satellite wind data indicates that the system is producing winds of 40 to 45 mph, and recent satellite and ship observations suggest that a circulation is gradually becoming better defined.

If this activity continues, the wave is likely to become a tropical storm later today or tonight as the system moves westward over the West-Central Caribbean sea at 20 to 25 mph. Regardless of development, locally heavy rainfall and gusty winds, perhaps to tropical storm force, are likely along the southern coast of the Dominican Republic and Haiti today, the NHC advises.

Tropical storm conditions are likely to occur over Jamaica by this afternoon or evening, and could reach the Cayman Islands overnight. Other territories in these areas, including Belize, and elsewhere in the Western Caribbean Sea should continue to monitor the progress of this disturbance. 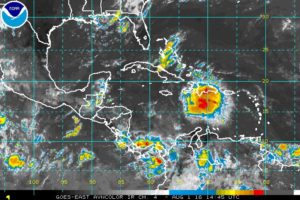 The National Meteorological Service of Belize calls for relatively moist and unstable conditions to prevail over our area today.

The 24 hour forecast is for sunny skies with cloudy spells today and cloudy at times tonight. A few showers and thunderstorms are expected to occur mostly inland this morning, decreasing this afternoon, then redeveloping over the Southern and coastal areas tonight.

Winds will blow from East to North-East at 5 to 15 knots with the sea state becoming light chop to choppy.

The extended outlook through Tuesday is for some cloudy spells with a few showers and thunderstorms mostly inland the over the South and coast of Tuesday night.