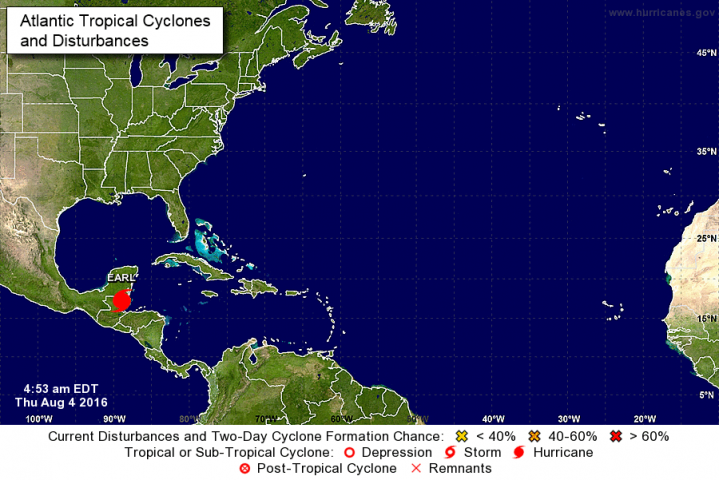 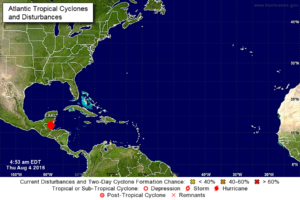 By The National Hurricane Center: SUMMARY OF 400 AM CDT…0900 UTC…INFORMATION

CHANGES WITH THIS ADVISORY:

SUMMARY OF WATCHES AND WARNINGS IN EFFECT:

A Hurricane Warning is in effect for… * Puerto Costa Maya, Mexico, southward to the Belize/Guatemala border.

A Tropical Storm Warning is in effect for… * North of Puerto Costa Maya to Punta Allen, Mexico. Interests along the southern coast of the Bay of Campeche should monitor the progress of Earl. For storm information specific to your area, please monitor products issued by your national meteorological service.

At 400 AM CDT (0900 UTC), the center of Hurricane Earl was located near latitude 17.3 North, longitude 88.9 West. A turn toward the west-northwest and a decrease in forward speed are expected later today.  On the forecast track, the center of Earl is expected to move across central and northern Belize this morning, move across northern Guatemala and the southern Yucatan Peninsula later today, and be near or over the southern Bay of Campeche Friday night.

Maximum sustained winds have decreased to near 75 mph (120 km/h) with higher gusts, and additional weakening is expected as the center moves farther inland.  Earl is forecast to weaken to a tropical storm later this morning and to a tropical depression by Friday morning.

RAINFALL:  Earl is expected to produce total rainfall accumulations of 8 to 12 inches over portions of Belize, Guatemala, and the Mexican states of Campeche, Chiapas, Quintana, Tabasco and Veracruz through Friday morning. Isolated maximum amounts of 18 inches are possible in Belize, northern Guatemala and the central part of the Mexican state of Chiapas.  These rains could result in life-threatening flash floods and mudslides.

STORM SURGE: A storm surge along the immediate coast of Belize and the eastern Yucatan Peninsula should subside today as the center of Earl moves farther inland.  Near the coast, the surge will be accompanied by large and damaging waves.

Next intermediate advisory at 700 AM CDT.

Next complete advisory at 1000 AM CDT.