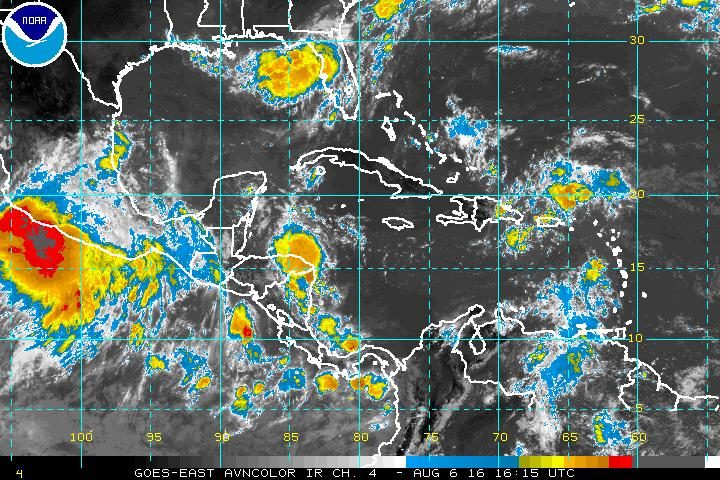 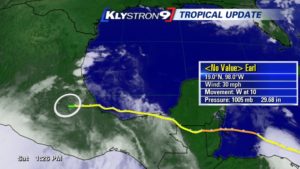 By BBN Staff: The National Hurricane center in Miami has issued an advisory on Tropical Depression Earl located well inland over Mexico west of Veracruz.

According to the advisory an area of cloudiness and thunderstorms associated with a trough of low pressure is located over the northeastern Gulf of Mexico. Some gradual Development is possible before the system moves inland over the southern part of the United States in a couple of days.

Regardless of development, heavy rainfall over northern Florida is anticipated. 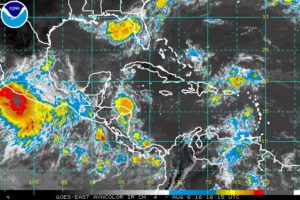 Taking a look at a tropical wave that is producing disorganized cloudiness and showers just north of Puerto Rico and the adjacent Atlantic, an area of low pressure could form in the middle of next week between Florida and Bermuda while the activity moves west-northwestward and then northward over the Atlantic.

The general forecast produced by The National Meteorological Service of Belize is calling for moderate easterly to south easterly airflow prevailing over our area.

The 24 hour forecast is for sunny skies with some cloudy spells today and partly cloudy tonight. A few showers or thunderstorms will occur mainly over the south and coast this morning, inland this afternoon and then over the south tonight.

Winds will blow to the East to Southeast at 10 to 20 knots. The sea state will be moderate.

The extended outlook through Sunday and Sunday night is for generally fair and warm weather with the chance of a few showers or thunderstorms developing inland in the afternoon and over the south during Sunday night.