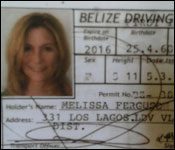 By Aaron Humes: A brown-haired 48-year-old Melissa Ferguson, accompanied by attorney Richard “Dickie” Bradley, this morning handed herself in to Belmopan police.

Ferguson, who also goes by the alias Mila Mason, was wanted for questioning in connection with the murder of 46-year-old Llewellyn Lucas on Friday July 15th. She is the female companion of 46-year-old Rajesh Ouellet aka William Mason who is remanded for Lucas’ murder along with four others.

4 days after the murder, police announced that they wanted to question Ferguson. By that time, she had reportedly already been seen leaving Outback Ranch with suitcases.