BTB is the real winner for Simone Biles vacation offer

Putting Poverty Into Perspective: The Struggle of the Young Professional Living in Belize

By Leon Westby: A much used statistic in the media these days is the stunning 40% poverty rate for the Belizean economy. But what does it actually mean when we say that such a large proportion of our population is living in poverty? The population of Belize stands strong at approximately 375,909 persons with 67% being working-aged individuals but only 39% of the population is actually employed and earning income. More than half of the persons working today are heads or co-heads of households and roughly half are between the ages of 14 and 34 – our young professionals, trade apprentices and technicians. This means that for every dollar they earn, there is at least one person, in some cases more, directly depending on that dollar for their survival. Now this would not be a problem if young persons were taking home reasonable sums of money at month’s end but that is certainly not the case. 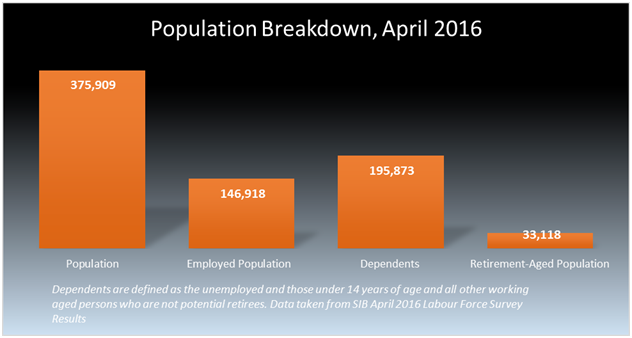 The vast majority, around 80% of employees in Belize, only have up to a high school certificate and earn a median monthly income of between $800 and $1200. Those with tertiary education fair slightly better, earning a median monthly income of about $1,800. If that does not immediately strike you as shockingly low, then let’s put it into perspective and breakdown what this means in terms of their buying power. A basic meal plan for the week would run between $50 and $60.Nothing fancy, just a regular plate of rice and beans with stew chicken or a small fried chicken from LeeChee and some tacos for breakfast and evening tea. That works up to between $200 and $240 a month to feed one person.

Having paid for food, the next basic need is shelter. With roughly 36% of households in Belize being owned with a mortgage or rented it is not unreasonable to say that a significant number of employed Belizeans cannot avoid the cost of rent or mortgage which ranges from $400 to $700 for a half decent dwelling. Basic utilities, light for an average household is around $80, water and phone another $40 each, monthly. The quick calculus, using the higher income figure in the range, and the lowest cost for each expense, brings us to about 63% of income being spent on basic necessities. Add to this transport costs, assuming exclusive use of public transport at $1 per trip and two trips per day for a business week and we’re at 67%. But let’s not forget we’ve established already that for every employed person there is at least one other dependent who must eat from that paycheck. Doubling food costs and the picture is as clear as the glass full empty: The average employee barely has income enough to feed his or her family and meet their basic living needs. 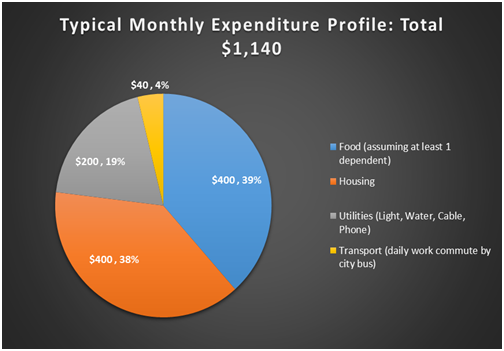 The Belize Poverty Assessment Final Report (GOB, 2010) corroborates this anecdotal evidence with empirical evidence on levels of spending.The report cites a comprehensive survey conducted by the Statistical Institute of Belize which puts average household spending at around $1088 a month with at least half of this going directly to food related purchases. That’s almost all of what comes in going right back out for persons earning on the lower end of the spectrum and around 60% for those with an Associate or Bachelor’s degree, and more than halfof this spending is on food and other basic necessities.

The starry eyed youth graduating from high school has aspirations of making money, earning a higher degree, getting their own living space and someday building a house and making a home of their own. But these goals require significant financial investment and without much cash left over after bills are paid, the only option is debt-financing. Ironically, debt-financing at the level and with an interest rate that would make it possible to advance oneself economically is not readily available to persons earning between $800 and $1200 a month – 80% of all people currently employed. However, what is available are short-term, payday type loans at exorbitant rates in excess of 10% which contribute to household indebtedness far more than it helps households to progress. All this translates to a youth population that is hard-pressed to make ends meet and who must move mountains to attain the smallest victories of personal and professional development. A youth population that is by all accounts trapped in poverty in some form or the other. They have no real opportunity to save money for their future, and their present spending does little more than help them survive. This is a precarious state of affairs as this is the pool from which we will draw our future public and private sector leaders. If they are steeped in despondency and desperation then they will not compete effectively, their growth will be stunted.

Without the kind of meritocracy inherent in a society where one feels they can legitimately put forth effort and gain improvements in income and lifestyles, then we will not get the best people decades down the road with the right motivation to make Belize better. 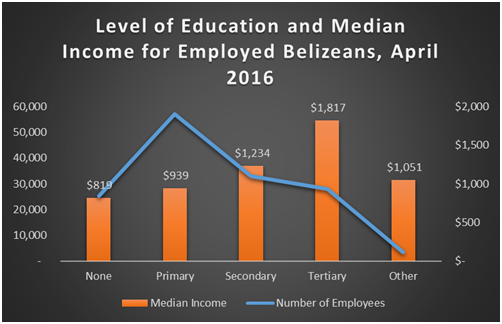 A first step that each youth must take is to commit themselves to paying keen, critical attention to how the macro-economic affairs of the country are being handled. The decisions our policy makers take in Parliament shapes the landscape on which we toil: it affects earning potential, income, expenses and access to assets than can change our lives. Understand that poverty is not a problem just for the 40% but it is a constraining factor for almost all working Belizeans as we have to supplement the survival of those not employed and earning income.