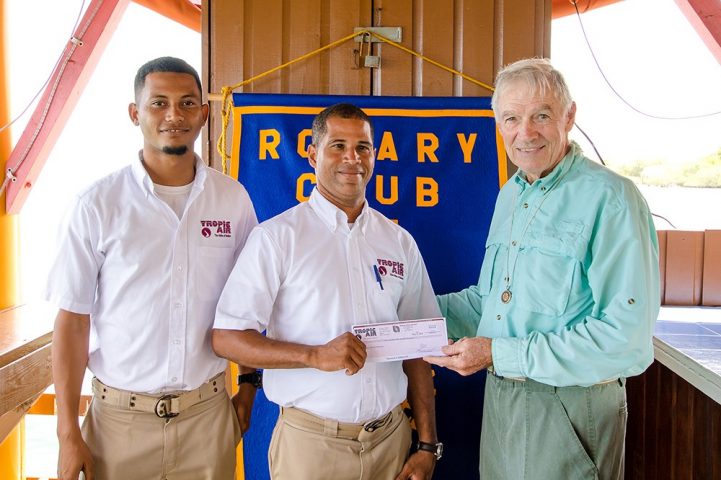 By BBN Staff: Tropic Air, Belize’s premier airline, today announced that a check for $450 was presented to the Rotary Club of Placencia to be used to benefit its hallmark community program referred to as “Seniors Sitting Together”.

President of Tropic Air, John Grief III, presented the check of $450.00 to Jim Weller, Acting President of the Placencia branch of the Rotary Club on August 16th. 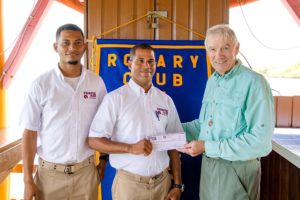 Funding for this donation was obtained from the airline’s July 2016 nationwide #TropicGivesBack fundraising campaign. Under this innovative program, a station is selected to conduct the fundraiser each month and Placencia was selected to benefit for the month of July. For each ticket purchased at the station in Placencia $1.00 was set aside for the local Rotary Club.

In a release from the company, President of Tropic Air, John Grief III, is quoted as saying “On behalf of our customers and staff, we are happy to present a check to the Rotary Club of Placencia. This donation will not only help to support one of the club’s great programs, but also gives back to one of the 11 communities we serve in Belize”. “At Tropic”, he said, “each and every member of our staff is encouraged to get involved in their community, whether that is through direct outreach, working within a larger organization, such as Lions or Rotary, or even through mentoring or sports participation.”

John Grief III, founded Tropic Air in 1979, has overseen Tropic’s steady growth to become the largest, most experienced and premier airline in Belize. John Grief III, remains at the helm of this successful airline which now employs over 300 staff members and offers over 200 daily scheduled flights to 18 destinations in Belize, Mexico, Honduras and Guatemala.

For the month of August the fundraiser is being carried out at the Belize City Municipal airstrip.