By Aaron Humes: He says he had always intended to do so, but following a meeting on Wednesday morning between the Prime Minister of Belize, Right Honorable Dean Barrow and the Belize Chamber of Commerce and Industry where the Chamber called on the government to accede the UN Convention on Anti-Corruption. Barrow has agreed with the Chamber to set up a working group in the next two weeks so that Belize can finally sign the Convention and set up a new bi-cameral Public Accounts Committee. 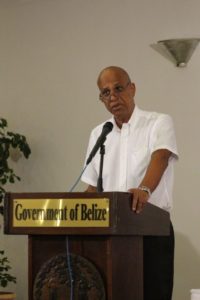 According to Barrow, Belize must take this issue seriously and so the group is to convene within two weeks to get started. Later he mentioned the many burdens Belize will take on including reviewing other countries’ reports and writing its own and establishing a specific anti-corruption body, though he suggested that the Financial Intelligence Unit (FIU) may take on some of these responsibilities.

In related news, Barrow says the BCCI has accepted government’s position articulated from the time of our last administration that the reconfiguration of the Public Accounts Committee to include the social partners in the senate must still result in a majority G.O.B. membership of that committee.