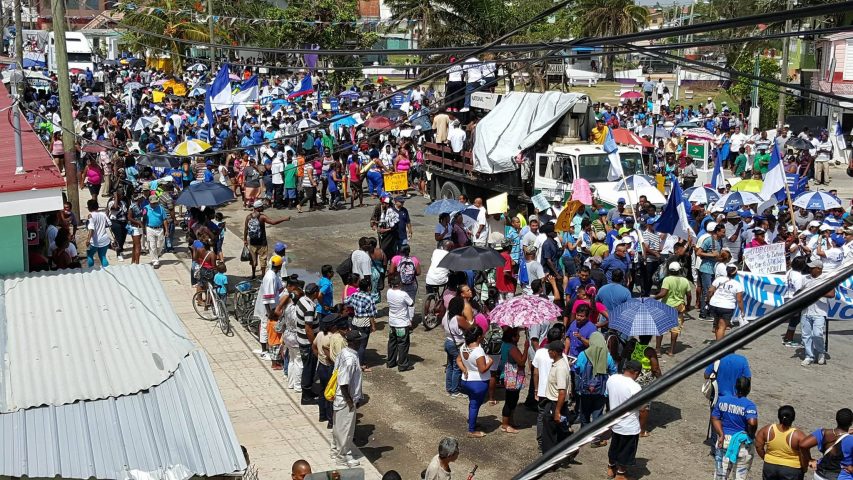 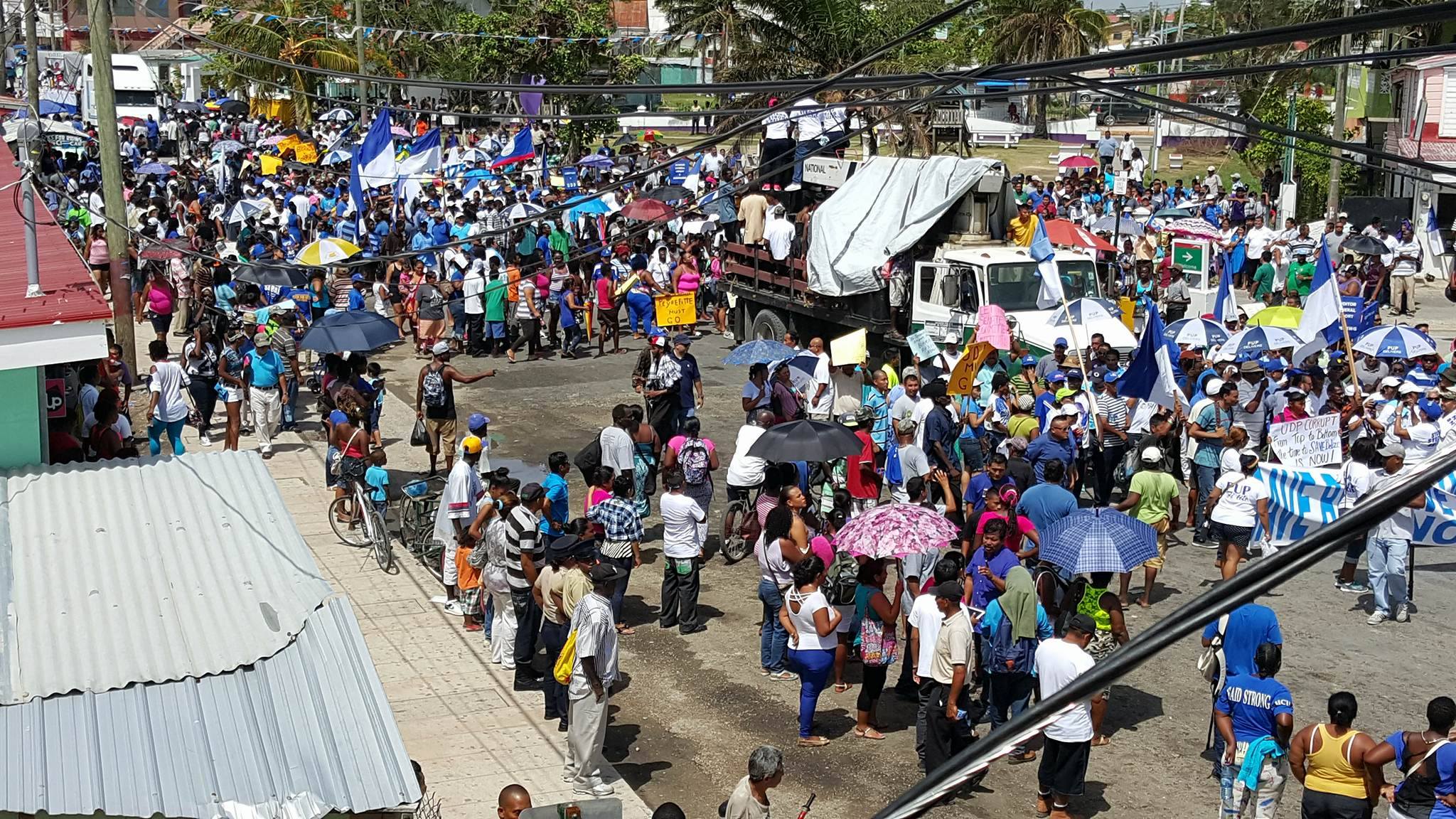 By Aaron Humes: Close to five thousand persons from across the country, in the party’s colors of blue and white, swelled through downtown Belize City from Constitution to B.T.L. Park in a show of force not seen by the People’s United Party (PUP) in the Old Capital in at least 20 years.

According to John Briceño, party leader: “I am very, very pleased with the people that came out.  I am quite excited and energized.  It is a concerted effort and everybody did their part, every constituency did their part and even people individually decided to come out and show their support that they want to stand up for Belize and to give a message to Mr. Barrow that enough of the corruption and that he needs to take decisive actions on the wrongdoing and the corruption of his government.”

The scheduled demonstration by the opposition follows on from those held by other organizations, including the religious community, in the past few weeks.  As the procession reached Albert Street, those riding on trailer trucks were asked to change course to avoid crossing over the Swing Bridge, effectively breaking up the throng that had amassed in the downtown area.

The rallying cry for the PUP is that there must be a Senate Select Committee to investigate the Immigration Department.

Senator Eamon Courtenay argues: “The Constitution was actually amended to specifically give the Senate the power to investigate this type of allegation of corruption, irregularity and fraud.  So the Constitution provides for this.  It is, I would say, disingenuous for the government to suggest that the better approach is to go by way of a bicameral committee.  It begs the question, why.  The reason why is obvious because the prime minister and the United Democratic Party have said that they want to have a situation where they control the committee.  Now as everybody has said, you cannot be accused or suspected of wrongdoing, conduct an investigation into it yourself, report on it yourself and then make recommendations about how to correct your own wrongdoing.  So it is designed of course to protect the corruption, it is designed to corrupt the illegality.  It is designed to protect and cover up the irregularities.”

The logic that the bicameral commission will be comprised of a majority from the United Democratic Party and thus will presumably shield its own from prosecution is one that is also shared by Briceno: “The Joint Select Committee, they don’t even have a terms of reference.  In the Joint Select Committee the UDP government is going to have a majority.  They said eleven people.  First of all, to get eleven people to agree to anything is impossible.  But secondly, they are going to control six out of the eleven, so they are going to ensure that they do everything possible to protect their corrupt ministers.”

And that in itself constitutes a conflict between the public and private interests of those in official positions.  That’s the message brought to an audience of supporters at BTL Park where the rally culminated. Said Senator Courtenay: “It is a direct conflict of interest, a direct conflict of interest and the Constitution speaks to this.  It says people who are members of the National Assembly should not put themselves in a position of a conflict of interest and here it is that the people who have been exposed as shown to have been doing wrongdoings want to investigate it.  It seems to me very obvious that the entire country, and I speak specifically about the churches, I speak specifically about the unions and the business community and everybody has got to say to the government: we will not accept this, we have seen the game and we can see what you are trying to do.  It is an embarrassment, it is a total disgrace what the prime minister is proposing and we will not stand for it.”

But most importantly for the PUP, it now has momentum, which  Party Leader Briceno says they will continue to ride in order to raise awareness of what has been taking place in government under the ruling party.