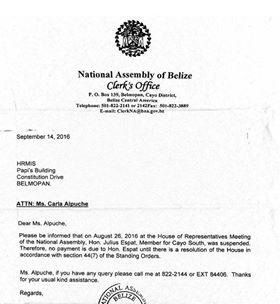 By BBN Staff: Hon. Julius Espat, Area Representative for Cayo South, has received a letter from the Clerk of the National Assembly informing him that he has been cut off of funds for his division as well as his stipend.

Espat says that he had sent a letter to the Clerk requesting clarification on whether he was suspended or not due to the fact that the rules and procedures regarding his suspension from the House were not followed.

He obtained a response by way of a letter copied to him and sent to the Ministry of Finance, informing Carla Alpuche that no payment should be paid to Espat until the House formally decides what to do.

Espat said that the problem is not about him but about the constituency of Cayo South.

Espat also stated that this goes beyond politics and that the people of his constituency will not have an opportunity to be assisted in any way. 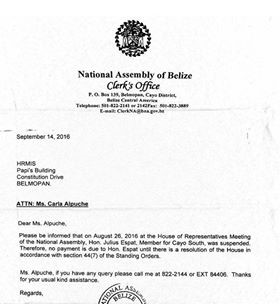