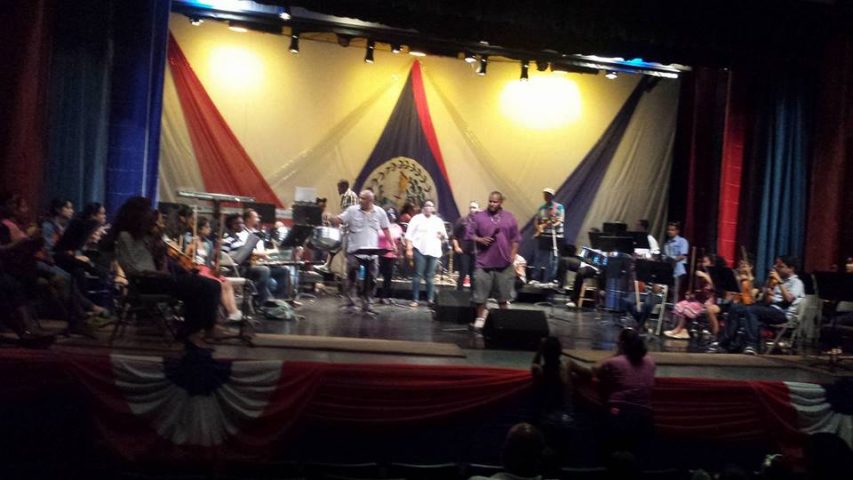 By Glenn Tillett:  More than half a century ago, as a mere toddler I used to accompany my mother occasionally when she had to go to Radio Belize to do “Children’s Corner” and “Schools’ Broadcast”. She even used my voice once in a pre-recorded broadcast program. I was precocious and handy. I loved playing in the elevator and looked forward to going to the Albert Cattouse building if only to ride the elevator. My mother reminds me that she was one of the first persons to put Frankie Reneau on the air, so to speak, on a broadcast of “Children’s’ Corner”. He was so small she recalls that they, (the show’s producers), had to get an adult to operate the pedals on the piano for him.

In one his books, I think it is “The Crowd Called UBAD”, Evan X Hyde remembers playing piano with Frankie Reneau and winning a National Festival of Arts golden award. He recalls that they were like “Mutt & Jeff” because Frankie was still very much a child, and he was older and taller. Evan, one of my former mentors, is 16 years older than I am.

I first saw Frankie perform, along with the Mission Singers, and a duo of Bob Reneau dancers, at St. Matthew’s Anglican Church in Pomona Valley in 1971. He sang “Lamb of God”.

In 1996 Frankie Reneau was commissioned, by then Culture minister Phillip Goldson, and in collaboration with Gina Scott, produced “Celebration”, a 20 song opus of Belizean music. In my opinion it was a watershed moment. I heard sporadic anecdotal reports that he had performed for a few years occasionally, some classical piano pieces in Belize.

As coordinator of the September Celebrations (1999, 2000) and chairman of the National Arts Council I had discussed with the late Beverly Smith the idea of having Frankie write and perform with an orchestra, a symphonic Belize national anthem. I really felt we needed a grand “big sound” one for important state occasions. The idea was not given much support by the political powers that be who all wanted to defer to the marital sounding cadence of a rendition that George Price preferred. I left the National Arts Council as it transitioned into the National Institute for Culture and History (NICH), incidentally an Assad Shoman idea, but I was delighted in 2004 when NICH opened the new Bliss Center for the Performing Arts with Frankie Reneau and a choir – a string ensemble actually, doing “Land of the Free” a trademark 9-minute version of the national anthem. Thereafter Frankie, his genius and his compositions became institutionalized as part of our September Celebrations.

In 2005 he returns to produce two concerts, a piano recital of classical music and another more eclectic play list with other Belizean musicians.

In 2006 “We are Belize!” a Frankie Reneau composition to commemorate Belize’s 25th anniversary is staged for two nights to rave reviews and standing ovations at the Bliss Center. It is a voluminous production with over 90 Belizean musicians, vocalists and arrangers and the result of months of work and collaboration.

In 2007, he returns with a re-mastered version of “We Are Belize” for the stage and a box set with a DVD and matching CD which captures the 120-minute, 13 performances.

In 2008 he performs in concert with music students from the Pallotti Strings and the voices from the Belize Chorale Society.

2009 his presentation is an eclectic mix with students from his now annual master classes, the Chorale Society, a jazz quartet and chanteuse Nelita Castillo.

2010 and 2011 his now annual effort of a summer program for piano students at Bliss presents a scintillating recital that included the Belize Choral Society and other musicians. They also form the Summer Arts Institute.

In one of his concerts he mixes in piano concertos by Ludwig Beethoven, (German), with Béla “The Magnificent” Bartók, a Hungarian composer, Claude-Achille Debussy, a French Impressionist composer, Sergei “Rachmaninov” Rachmaninoff (Russian), and George Gershwin’s “Rhapsody in blue”, (American jazz). Gershwin was American.

In 2011, Frankie unleashes “Hymn to Belize”, which is described in the media as “a 10 minute devotional piece for his place of birth. It is a huge work designed for a 45 piece orchestra and a hundred person chorus, and, “a patriotic tour de force”.

Frankie told the media: “It’s a work for orchestra and possibly 80 voices we shall have in a huge choir and the orchestra itself is comprise of flutes, bassoon, trumpets, French horns, clarinets – all the string sections and I am putting all that together as a choir and to be performing on the 21st. The sentiments in it are all in ‘praise of a nation’ a song to a nation – that’s what I wrote – I think very stirring work in terms of what I pledge to thee my country, my love and loyalty I gave land of my birth, my home deep in my heart. You live forward from strength to strength we do. There are many blessings we hear proclaimed with heads held high and in our hearts we proudly sing our name Belize our beloved country. I have all the words in there, but it’s totally an acclamation of Belize, almost like God in a way and praising Belize for what it has done for us and what is means to us.”

The production as staged at the Independence Day ceremonies was for the most part panned by the armchair critics who could not, it seem, understand the intent within its conceptualization, and were a little bewildered by its many moving parts.

In 2009 I had dared to suggest to Frankie that he redo the now iconic seminal “Mass In Blues” and he had dismissed the suggestion. He told me candidly that he could barely stand to listen to the recording, it sounded too amateurish, even childish and he could hear mistakes, missteps, missed cues and out of tune notes.

In 2012 there is Mass In Blues Redux. “Most composers would like to make forward into something different. However, I went back to look at Mass in Blues in light of this project now,” he says in an interview.

“There was another in my midst but I know what’s going on but on reflection and having visited the world – I realized that it was something inspiring about that work. Once I revisited I saw so much scope for things that I as a young guy would not have thought about musically but it was not around – even the computerized things that they had, even sounds you can make.

“Having saxophones and things like at that time in Belize was not something I could have gone against. So I said, right I have to change some of the melodies here and there, I didn’t tamper with it too much. I changed the setting from a choir to a gospel choir which I thought I could do a lot with and also have backing vocals as well. I think in general what I ended up with was something more exciting, overall. The voices I have are quite amazing. I think when you hear it – you’ll know that it will have a completely different ring to it.” I wondered if that return to his roots, so to speak, was reactionary to the less-than-acclaim “Hymn to Belize” received.

I was asked to do a bit part in his latest production “The Song of Belize” a six song Frankie Reneau composition accompanied by the narration of “Balam and The Symbols of Belize: Monologues for 35th Anniversary of Belize’s Independence”, written by Kim Vasquez. I gave voice (pre-recorded) to Balam, The Protector in the opening act, scene one. When I visited what I was told is the only full rehearsal I saw steel pans, keyboards, electric bass and rhythm guitars, an acoustic guitar, violins, 2 cellos, flutes, saxophones, trumpets, a drum set and players and at least 20 voices. Reading the script and hearing snippets of the score of 6 songs (This is My Land, Home Sweet Home, Mother Earth, A better Place, Thirty Five Years, Shout Belize) it is rousingly nationalistic and potently patriotic. I did not attend the premier presentation last Sunday evening at the Bliss and just watched what was presented at the official ceremonies in Belmopan.

The body of Frankie’s five plus decades of work to create uniquely and authentic Belizean music compositions needs annotation, archiving and curating. His efforts to produce opuses need better pre-planning, forward thinking budgeting and not only the continued widening of his collaboration with Belizean music and musicians but with other art forms. The man is a genius with unparalleled international experience that offers knowledge, and expertise of craft he is quite skillful at imparting.

In my imagination I’d like to see him challenged to collaborate with Erollyn Wallen, Lord Rhaburn, Carlos Perrote, Sweet Pain, James Sanker, the BDF Band, the Imperial Band, some of the modern rappers, reggae and brukdong performers, and even more with our choreographers, playwrights and scriptwriters.