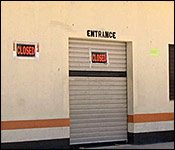 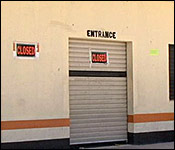 By BBN Staff:The bus terminal in Benque Viejo Town has been closed down and is causing a major inconvenience because buses have to park on the side of the road to load and off load passengers.

A source told BBN that commuters have to stand up in the hot sun to wait for the bus.

Yesterday, the terminal operator, Thomas Shaw told 7 News that all this could have been avoided if the bus companies would have paid their $3.00 a day fee to use the terminal.

Shaw said that he took up operations at the terminal in March of this year and it has been a lot of drama getting the bus companies to pay their fees.

He mentioned that one bus company owes him approximately $3,000 which is the reason why he gave up and closed down the terminal today, Friday, October 7, 2016.

He said that he did the best he could for the comfort of the commuters and even tried to accommodate the bus companies by only charging $2.00 per day but they still refused to pay their fees.

Since nothing worked, Shaw said that it is now up to the Mayor of the municipality to address the issue.