Chamber to decide on approach for BNTU’s request for solidarity

Prime Minister will meet, but with N.T.U.C.B.

By BBN Staff:Prime Minister Dean Barrow has written to BNTU president Luke Palacio, stating that the BNTU’s request for a meeting has been trumped by its umbrella organization, the National Trade Union Congress of Belize.

Palacio’s claim that no formal request has been made to return to negotiations is “a fig leaf,” as the latest such call was made two days ago. But he accuses the Union of having their minds made up before meeting with the Prime Minister on September 22, refusing to listen to Government’s position and deciding on strike action before thoroughly considering the official side.

Nonetheless, Barrow says Government remains ready to further discuss the good governance agenda and other issues, but there is a problem: the National Trade Union Congress of Belize has adopted the position that the good governance agenda is one that it had already taken up, and that it should now be synchronized and further progressed by the Congress (and by the BNTU as part of the Congress). The Prime Minister says he has therefore formally written to the N.T.U.C.B. to fix the earliest possible date for those negotiations.

According to Barrow, working with the N.T.U.C.B. as umbrella rather than the B.N.T.U. only makes sense, as he thus far has met with the utilities unions separately and the Public Service Union and Association of Public Service Senior Managers also have a role to play. The Prime Minister states that it would be counterproductive and time consuming for Government to try to reach agreement with each individual Union, especially when, he states, time is obviously of the essence. The Prime Minister’s letter closes with another call to the Union to heed the advice of the Catholic Bishops to stop the strike and return to school. 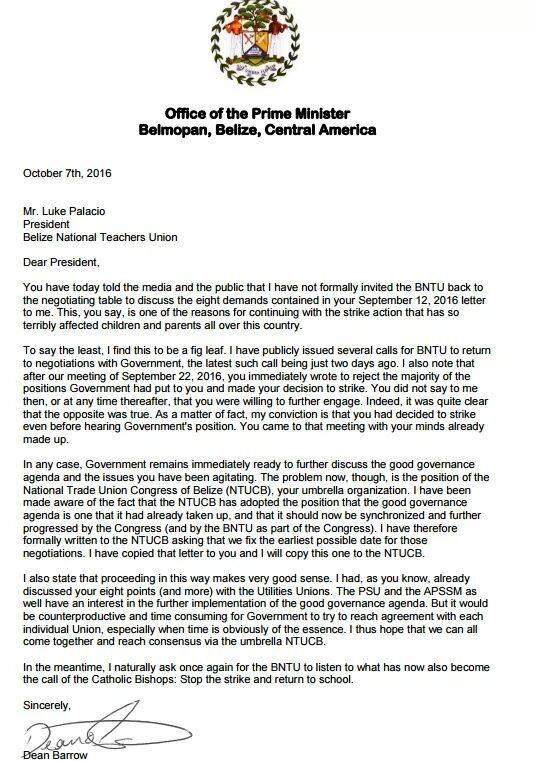